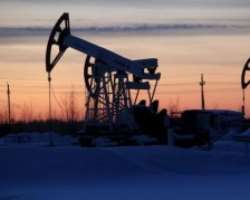 Pump jacks are seen at the Lukoil company owned Imilorskoye oil field, as the sun sets, outside the West Siberian city of Kogalym, Russia, January 25, 2016.

REUTERS/SERGEI KARPUKHIN
Top oil exporters Russia and Saudi Arabia agreed on Tuesday to freeze output levels but said the deal was contingent on other producers joining in – a major sticking point with Iran absent from the talks and determined to raise production.

The Saudi, Russian, Qatari and Venezuelan oil ministers announced the proposal after a previously undisclosed meeting in Doha – their highest-level discussion in months on joint action to tackle a growing oversupply of crude and help prices recover from their lowest levels in more than a decade.

The Saudi minister, Ali al-Naimi, said freezing production at January levels – near record highs – was an adequate measure and he hoped other producers would adopt the plan. Venezuela’s Oil Minister Eulogio Del Pino said more talks would take place with Iran and Iraq on Wednesday in Tehran.

“The reason we agreed to a potential freeze of production is simple: it is the beginning of a process which we will assess in the next few months and decide if we need other steps to stabilise and improve the market,” Naimi told reporters.

“We don’t want significant gyrations in prices, we don’t want reduction in supply, we want to meet demand, we want a stable oil price. We have to take a step at a time,” he said.

Oil prices jumped to $35.55 per barrel after the news about the secret meeting but later pared gains to trade below $34 as expectations for an immediate deal faded.

Iran, Saudi Arabia’s regional arch rival, has pledged to steeply increase output in the coming months as it looks to regain market share lost after years of international sanctions, which were lifted in January following a deal with world powers over its nuclear programme.

The fact output from Saudi Arabia and Russia – the world’s two top producers and exporters – is near record highs also makes an agreement tricky since Iran is producing at least 1 million barrels per day below its capacity and pre-sanctions levels.

“We think other producers need to freeze straight away including Iran and Iraq. We believe this step is meant to stabilise the market,” said Qatar’s oil minister Mohammed al-Sada.

Iraq also has long said it expected its production to rise further this year but last month it said it was ready reduce its fast-growing output if all OPEC and non-OPEC members agreed.

IRAN KEEN TO BOOST OUTPUT
The Doha meeting came after more than 18 months of declining oil prices, knocking crude below $30 a barrel for the first time in over a decade from as high as $115 a barrel in mid-2014.

The slump was triggered by booming U.S. shale oil output and a decision by Saudi Arabia and its OPEC Gulf allies to raise production to fight for market share and drive higher-cost production out of the market.

Saudi Arabia has long insisted it would reduce supply only if other OPEC and non-OPEC members agreed, but Russia, the No.2 exporter, has said it would not do join in as its Siberian fields were different from those of OPEC.

The mood began to change in January as oil prices fell below $30 percent barrel.

While Venezuela has been the hardest-hit producer, current oil prices are a fraction of what Russia needs to balance its budget as it heads towards parliamentary elections this year. Saudi finances are also suffering badly, running a $98 billion budget deficit last year, which it seeks to trim this year.

But while talking about potential cooperation with OPEC, Russia raised its output to a new record high in January.

“Even if they do freeze production at January levels, you have still got global inventory builds which are going to weigh on prices. So whilst it’s a positive step, I don’t think it will have a huge impact on supply/demand balances, simply because we were oversupplied in January anyway,” said Energy Aspects’ analyst Dominic Haywood.