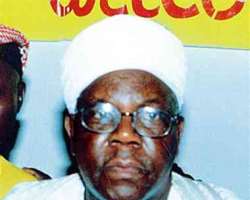 Secretary-General, NSCIA, Alha
A new study by the Pew Forum on Religion and Public Life has grouped Africa among the most religious places in the world. According to the Cable Network News, the study shows that at least half of all Christians in sub-Saharan Africa believe Jesus will return to Earth in their lifetime.

The study, conducted in Washington, notes that it is not only Christians in Africa who express their religion passionately, either. It says nearly one in three Muslims in the region expects to see the re-establishment of the caliphate — Islam's golden age — before they die.

The study, 'Tolerance and Tension: Islam and Christianity in Sub-Saharan Africa,' is based on more than 25,000 face-to-face interviews in more than 60 languages in 19 countries.

The countries in the survey, according to the study authors, are collectively home to 75 per cent of the total population of sub-Saharan Africa, which are about 820 million people.

According to the report, at least three out of 10 people across much of Africa said they have experienced divine healing, seen the devil being driven out of a person or received a direct revelation from God. 'In many countries across the continent, roughly nine in 10 people say religion is very important in their lives,' the study found.

The report notes that the study puts even the least religious countries in Africa ahead of the United States, which is among the most religious of advanced industrial countries.

For example, only one in five American Christians said they expected to see Jesus return to Earth in their lifetime — far lower than the African result of more than half — according to a 2006 Pew survey, which asked a slightly different question.

The Pew Forum also studied how Christians and Muslims feel about each other in a region that has seen religious violence between the two communities, as well as the first spectacular al Qaeda attacks on American targets, the bombings of U.S. embassies in Kenya and Tanzania in 1998.

According to the study authors, the survey shows that Muslims have a significantly more positive view of Christians than Christians do of Muslims.

Making reference to Nigeria, the study also notes that hundreds of people from both faiths have died in violence between Christians and Muslims in the country in the past decade.

Two religions are officially recognised in Nigeria. These are Islam and Christianity. But other religions like the African traditional religion are freely practised in the country because Nigeria's constitution guarantees freedom of religion.

The study notes that Nigeria is almost evenly split between the two main religions, and some experts see it as the fault line between largely Christian Southern Nigeria and predominantly Muslim North Nigeria.

Nigeria is the most populous country in the region. It has the sixth largest Muslim population in the world, according to an October 2009 Pew Forum report.

There is some dispute about whether the violence in Nigeria is truly caused by religious differences or stems from struggles over land, resources or tribal or ethnic identity.

Across the 19 countries in the survey, Christians and Muslims both associated positive traits with the other religion.

Many people also said they were more worried by extremists of their own religion than by the other.

People who said violence against civilians in defence of one's religion is rarely or never justified vastly outnumber those who said it is sometimes or often justified.

But substantial minorities in many countries said it was sometimes or often justified, the Pew Forum found. It does not have comparable data for other parts of the world, spokesman Robert Mills said.

Most people across the subcontinent said they do not know much about the other religion. Both religions have grown exponentially in Africa in the last century.

Including predominantly Muslim North Africa, there about 400 to 500 million members of each religion on the continent as a whole, the report said.

The growth of the two religions leaves only about one in 10 people in sub-Saharan African who are neither Muslim nor Christian, the study found. That implies growth cannot continue at the same rate, because there is little evidence of people switching from one faith to the other.

Sub-Saharan Africa is about 30 per cent Muslim, according to the October 2009 Pew report; the comparable study for Christians is not yet complete.

The growth of monotheism has not stamped out older practices, the new study found.

'About a quarter believe sacrifices to spirits or ancestors can protect them from bad things happening. Sizable percentages believe in charms or amulets, many consult traditional religious healers and sizable minorities keep sacred objects such as animal skins and skills in their homes,' the study authors said.

In the United States, 29 per cent of Catholics and 21 per cent of Protestants believe in astrology, and similar numbers believe in reincarnation, a Pew study published in December found.

Many Africans also managed to hold two conflicting beliefs on another subject as well: Majorities in both religions support democracy, but at least one in three people in both religions also support making the Bible or Sharia the law of the land.

Reacting to the study, Revd Father Mathew Afolayan of St. John Catholic Church, Ilorin, Kwara State, admitted that Africans were religious in all aspects of their lives. According to him, 'Africans are religious. This, he said, reflects in their food and ways of life, noting that even farmers add religious dimensions to what they do.

'Nigerians particularly are close to God because of the challenges confronting them now. People go to vigil and attend crusades to seek the face of God in the hope of finding solutions to their problems,' he said.

But he said many people were serving God because of economic factors, adding, 'everybody is trying to serve God. If things improve you will see that there will be a reduction in the number of those attending churches.

'Nigerians are very religious, even the Muslims; it applies to us all. That is why churches are growing. People are looking for employment, looking for what to eat. This type of religion is not real and by the time things improve, that is when we'll see who is religious.

He queried the intrinsic value of religious conviction that failed to translate into moral robustness and discipline.

'All religions preach faith, morality and love and unless our religious communities are in the vanguard of moral rejuvenation and a spiritual rebirth, their claim to religion, to faith and to being standard bearers of all that is good and Godly cannot stand,' he said.