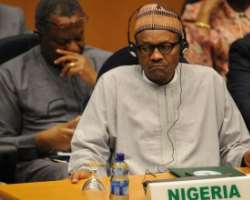 In some instances, the same purchase of vehicles, computers and furniture are replicated 24 times, totaling 46.5 billion naira ($234 million), 795 million naira is set aside to update the website of one ministry, while no purpose is assigned to a 10 billion naira provision in the education ministry's spending plan, according to Oluseun Onigbinde, partner and co-founder of BudgIT , a Nigerian group that campaigns for transparency in public spending.

“The key line items you find in the budget are a disservice to the idea that this government has come to represent change,” Onigbinde, whose group first publicly raised the discrepancies, said in a Feb. 9 phone interview. “It would have been better that they took a very good look at every line item and ensured that it was justified.”

Buhari has proposed a record 6.1 trillion naira budget this year to help revive an economy reeling from the impact of the low price of oil, the source of two-thirds of government revenue. Brent crude, which compares with Nigerian oil grades, fell 0.3 percent to $33.21 as of 8:33 a.m. in London, down 42 percent this year. Additional spending will be funded through tax revenue and the deficit of 3 trillion naira through borrowing, according to the Finance Ministry.

Former ministers and high-ranking civilian and military officials that served under the previous government, are under corruption investigation. Sambo Dasuki, the former national security adviser to President Goodluck Jonathan, is facing charges related to alleged misappropriation $2.1 billion meant for weapons procurement. About $150 billion stolen by corrupt officials in the last decade is in foreign banks, Buhari said in July. 'Padded Budget'

The government was the first to detect initial errors in the budget and Buhari wrote to lawmakers to correct them and welcomes further criticisms, Garba Shehu, a spokesman for Buhari, said by phone on Feb. 11 .

“If they know the one who padded the budget, they should announce that to the government,” Shehu said. “Anyone disagreeing with the budget is welcome to say their views, it is the only way we can make the country better.”

“The budget has become an instrument of the corruption process in this country over the last few years,” Jibrin Ibrahim of Abuja-based Centre for Democracy and Development, said in a Feb. 12 phone interview. “If the Buhari administration doesn't succeed in stopping that process, then the anti-corruption war will be completely futile.”

Onigbinde's Lagos-based BudgIT was the first to draw public attention to spending proposals he described as “suspicious and wasteful” amounting to 111.32 billion naira, which includes 53.7 million naira repeated 52 times, 37.8 million naira appearing over 369 times, and a 3.9 billion naira allocation for the presidential clinic that exceeds funds designated for all 17 of the country's teaching hospitals combined. These revelations have sparked public outrage and criticism of the government.

“There was a lot of expectation that there's a clear departure from the past where previous budgets have been padded,” Onigbinde said. “All we have seen with this budget is that they have done even worse than the past.”

It was while poring through the latest submission that BudgIT found unusual entries, including 31 million naira set aside as “rent” for the presidential residence, owned by the government, according to Onigbinde. 'Zero Budgeting'

The Budget and Planning Ministry said in an e-mailed response to questions on Feb. 11 that errors were not “unexpected” as bureaucrats grappled with a new system called “zero budgeting” adopted by the government. It didn't provide details of what the new system entails.

“However, the ministry has zero tolerance for malfeasance and whenever any wrongdoing is alleged, it will be thoroughly investigated and sanctions will be applied,” Charles Dafe, the ministry's director of information, said in the statement.

Despite the explanations, criticism of the government is mounting with civic groups questioning Buhari's running of Africa's biggest economy.

“The executive should recall the budget,” said Ibrahim. “They have to look back at what was submitted, identify the alterations, correct them, make sure they deal with those who did the alterations, and resubmit.”

Other analysts see in the blunders signs that the government isn't in full control.

“It's ridiculous,” said Clement Nwankwo, executive director of Abuja-based Policy and Legal Advocacy Centre. “It doesn't seem like the government managed to put together a first budget or has any control of its expenditure framework.”