Obasanjo And The legislators 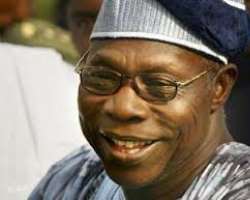 Opinion leaders of a nation, any nation for that matter, are respected for theirs views at any point in time which is capable of shaping the evolution and development of such country for good. Here in Nigeria, Chief Olusegun Obasanjo, a former military head of state and an elected president for eight years is one of them.

Despite the third term misadventure of Obasanjo, he towers above many Nigerian leaders for his sense of patriotism and commitment to the development of the mother land. During the Jonathan administration, he caused a lot of political convulsion and earthquake by his series of public letters to former President Goodluck Jonathan.

Some people lambasted him for using public medium in passing such messages to Aso Rock when he has the right channel to do that. His usual reply was that after many private counsels to those in power and their inability to heed them, he had no choice but to make them public so that history and posterity will record him in that light.

Today the members of the National Assembly are seething with sulphuric anger over Obasanjo`s letter. In the letter written last month, the former president accused the lawmakers of corruption, impunity, greed and of repeatedly breaking the nation`s laws. He also said that the lawmakers fixed their salaries and allowances above what the relevant agency approved for them. He further alleged that most of the 109 senators and 369 members of the House of Representatives were receiving constituency allowances without maintaining constituency offices as the laws required of them. He also accused the national legislators of insincerity over their planned purchase of 469 cars worth N4.7 billion.

Listen to the abridged version of Obasanjo opinion of our lawmakers :`Which detracts from ``distinguishness`` and ``honourability`` because it is shrouded in opaqueness and absolute lack of transparency and could not be regarded as normal, good and descent practice in a democracy that is supposed to be exemplary…It does not matter what else we try to do, as long as one arm of government shrouds its financial administration and management in opaqueness and practices rife with corruption, only very little , of anything at all, can be achieved in putting Nigeria on the path of sustainable and enduring democratic system, development and progress. Governance without transparency will be a mockery of democracy`.

Predictably, the national legislators are not amused and instead of addressing the issues raised by the former president, some of them are calling him names, saying that Obasanjo instituted corruption into the system by making references to the allegation of money brought into the chamber of the House of Representatives as meant for the removal of Speaker Ghali Na Abba.

Some of the legislators vent their spleen by arguing that because the national legislators denied Obasanjo his third term bid, which was responsible for the stance of the former leader. A spokesman for the House Representatives, Honourable Abdulrazak Namdas argued thus: `We have tremendous respect for the former president. We don`t want to be distracted by letters. Probably, the letter is not meant for the 8th Assembly because we have cued in with President Muhammadu Buhari. I think the letter is meant for the 4th or 5th Assemblies. It was misdirected`.

Whatever may be the past political transgressions of Obasanjo, as a Nigerian, he is qualified to have a say in the affairs of the nation. Instead of our legislators to address the issues raised, they are on a wild goose chase casting aspersions on an elder statesman. The problem with our leadership class is their inability or deliberate refusal to be above board and subject themselves to the rule of law. Some of them delude themselves that there are two sets of laws, one for them and another for the rest of Nigerians. This mentality of behaving as special people must be discarded.

It would be recalled that Senator David Mark as senate president was always boiling with rage any time; mention is made of legislators` salaries and allowances. The era of Chuba Okadigbo`s theory of `not spreading poverty` in Abuja is over. Our legislators and in deed all elected political leaders must be ingrained with the knowledge that the political office is not meant for wealth accumulation but service to the people.

Governance in the country is becoming too expensive and that is why even a councilor flaunts his wealth and has nothing to show for it. It is the same attitude of official negligence and indifference that is making our state governors to collect stupendous amount of money in the name of security vote. It is even reported that one governor in the South/South is collecting one billion naira as security vote monthly in an era where salaries are owed and many pensioners are dying because of the denial of their just entitlements.

The focal point of governance is the security and welfare of the citizens and those in power are the servants of the people. The issues raised by the former president are not personal or witch hunting. They are about the development of the nation. That is why the leadership of the national assembly should address them instead of the present attitude of ego trips.