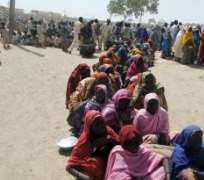 Gunmen in pickups and on bicycles stormed the remote villages of Yakshari and Kachifa in Damboa district, slaughtering villagers, said Musa Suleiman, a member of a local ad hoc group fighting Boko Haram alongside Nigeria’s military.

His account was supported by his comrade, Awana Ari.

The gunmen attacked the farming village of Yakshari around 9:30 a.m. (3:30 a.m. ET) on Saturday, slaughtering 22 residents and taking away food supplies and cattle, said Suleiman, who is from the town of Biu, 120 kilometers (75 miles) away.

“The Boko Haram gunmen killed 22 people in Yakshari by slitting their throats. They then stole all the food supplies and all the cattle in the village,” he said.

“On Friday around 10 p.m., Boko Haram gunmen raided Kachifa were they slaughtered eight residents and looted grains barns and herded their cattle into the bush,” Suleiman said.

The vigilantes believed the attacks were carried out by the same marauders.

A local official confirmed the attacks, adding that an unspecified number of women and children were taken captive in the attacks.

“We received reports on the attack on the two villages where the attackers killed, looted, and kidnapped women and children,” a Damboa local government official told CNN from Maiduguri.

“We are still working to determine how many women and children were kidnapped,” said the official, who didn’t want to be identified because he was not authorized to speak on the attacks.

News of the attacks was slow to emerge due to poor communication in the area following destruction of telecommunication towers by Boko Haram militants in previous raids.

Vigilantes in Biu received reports of the attacks late Saturday when their colleagues drove 86 kilometers (54 miles) from Damboa to break the news to them.

Nigerian troops retook the town of Damboa in August 2014 after it was briefly seized by Boko Haram the previous month.

Despite huge troop deployments in Damboa and other towns reclaimed from Boko Haram, the Islamists militants still carry out sporadic attacks on remote villages with no military protection, according to residents and vigilantes. Escalating attacks

The militant group has attacked the nation’s north for years.

Its aim is to impose a stricter enforcement of Sharia law across Africa’s most populous nation, which is split between a majority Muslim north and a mostly Christian south.

As the world remains transfixed on Syria-based ISIS, which has involved Western nations in anti-ISIS efforts, Boko Haram’s attacks have escalated.

Last year, Boko Haram claimed the morbid title of deadliest terror group for its killings in Nigeria, Chad and Cameroon.

The extremist group based in northern Nigeria killed 6,644 people in 2014, an increase of more than 300% from the previous year, according to the latest tally from the Global Terrorism Index.