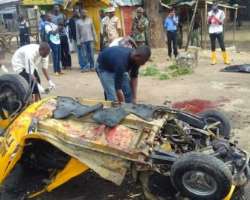 Gun and knife-toting assailants on bikes and in vans stormed the remote villages of Yakshari and Kachifa on Friday and Saturday, said Mustapha Karimbe, a local vigilante assisting the military in the fight against Boko Haram Islamists.

'The attackers killed 30 people in two separate attacks on the two villages last night (Friday) and this morning (Saturday),' Karimbe told AFP adding that they also looted and stole cattle.

The village of Yakshari was attacked at around 9:30 am on Saturday, with the assailants slaughtering 22 residents 'by slitting their throats before emptying food stores and taking away all the cattle', Karimbe said, speaking from the town of Biu approximately 120 kilometres (75 miles) from the village.

'We believe the same gunmen carried out both attacks on the two villages,' Karimbe said.

Dozens of people have been killed in Boko Haram attacks in recent weeks near Maiduguri, capital of northeast Borno state, despite Buhari's December boast that the jihadist group had been more or less defeated.

Since then the militants have killed dozens in raids and suicide attacks, including across the border in Cameroon.

On January 30, at least 85 people died when insurgents stormed and torched one village, while on Thursday two female suicide bombers killed at least 58 at a camp for people made homeless by the insurgency.

Rights group Amnesty International has also accused the military itself of committing war crimes and possible crimes against humanity in the course of its operations against the group.

Boko Haram, which seeks a hardline Islamic state in northern Nigeria, has killed some 17,000 people and forced more than 2.6 million others to flee their homes since the start of its insurgency in 2009. – AFP.