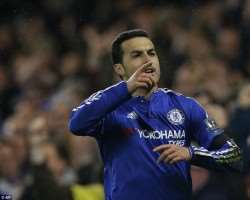 The masks that a number of Chelsea players have worn during the past few uncertain months started to feel some time ago like symbols of the fact that they have performed like champions in disguise for much of this strangely beautiful Premier League season.

Diego Costa was the latest to sport one of the masks on Saturday after what was called, euphemistically, a ‘duel’ with a teammate in training. Gradually, though, the need for disguise is diminishing and against Newcastle, Chelsea unveiled themselves in much of last season’s glory.

They have not lost now since Jose Mourinho left the club a week or so before Christmas and Guus Hiddink took over. Their progress, pockmarked with draws, has hardly been spectacular but the recovery has been steady and against Newcastle, it accelerated fast. Newcastle, it must be pointed out, are a desperately poor side. If this was the best they could muster after watching their relegation rivals, Sunderland, close the gap on them at the bottom with a morale-boosting win over Manchester United, then one fears for their ability to beat the drop.

The scale of this defeat pushed Newcastle down into the relegation zone on goal difference below Norwich City. They will have to improve dramatically if they are going to escape. Jonjo Shelvey and Andros Townsend, their new signings, already look like men adrift. Adrift and bereft, wondering what the hell they have got themselves into. s

Chelsea had taken the lead within the opening five minutes after Willian, their player of this unusual season, had wriggled away from his marker in midfield and slipped a pass through to Costa, who had made a strong run into the area. Costa slid to meet the ball and hooked it expertly past Rob Elliot. It was his seventh goal in his last eight league appearances.

They went further ahead three minutes later as Newcastle pressed down hard on the self-destruct button. First of all, Shelvey under hit his corner woefully and it was cleared upfield.

Rolando Aarons brought it under control but passed it square towards Daryl Janmaat. That was under hit, too, and Pedro intercepted it and ran 30 yards before sliding it past Elliot.

It was the kind of half where every Chelsea attack seemed to lead to a goal or a gilt-edged chance. They were 3-0 up after 17 minutes and this one was the best so far.

Costa broke from midfield and beat Fabricio Coloccini to a through ball. Costa saw Willian bursting into the box and threaded a perfectly weighted pass into his path and the Brazilian slammed it past Elliot. Even aside from their laughable defending, Newcastle were appalling. They were disjointed and disinterested. Aleksandar Mitrovic seemed to think going nose to nose with John Terry counted for something.

Mitrovic’s foul on Terry midway through the half forced the Chelsea skipper off before half time but the Newcastle supporters might have preferred it if Mitrovic had looked at any point before then as if he was going to climb out of Terry’s pocket.

Chelsea should have been six up by half time. Branislav Ivanovic scuffed a fine opportunity after a pull-back from Eden Hazard and Pedro shot tamely at Elliot when Costa played him clean through. It didn’t matter. Newcastle were so poor Chelsea simply toyed with them.

They improved a little after half time, which may have been partly due to Terry’s absence. With Kurt Zouma out for six months, Chelsea now face central defensive worries as they approach this week’s Champions League tie with PSG in Paris. Ivanovic deputised alongside Gary Cahill in the second half.

Newcastle actually managed a couple of shots in the minutes after the interval but then they allowed Cesc Fabregas the freedom of midfield and his lofted ball over the top of the visiting defence embarrassed Steven Taylor as he tried and failed to head it clear. Pedro too the ball on his chest and slid it past Elliot. The game lost momentum after that. Thinking of the match in France on Tuesday night, Hiddink took Costa off and replaced him with Bertrand Traore and Chelsea began to stroke passes around as if they were playing a lazy game of keep-ball on the training ground at Cobham.

Newcastle made a half-hearted effort to respond but Shelvey spent most of the second half gesturing at his teammates in apparent dismay. He knows now there aren’t any other leaders in this Newcastle team. If anyone is going to rally them, he is going to have to do it himself.

As for Chelsea, their flirtation with relegation appears to be over. They ended this game nine points clear of the bottom three and just two points behind Jurgen Klopp’s Liverpool. They are surely too far back to mount a challenge for the top four but they may at least be coming into the kind of form that will give PSG coach Laurent Blanc cause for concern. +19
Pedro, who netted twice in the 5-1 win over Newcastle on Saturday, dribbles past makeshift left back Rolando Aarons

Eight minutes from the end, the second of Chelsea’s masked men on the pitch on Saturday night, Cesar Azpilicueta, dashed to the byline and cut a low cross back for Traore, who steered it past Elliot at his near post. It was 5-0 and Newcastle’s embarrassment was complete.

They should be embarrassed anyway. This was a performance that was lacking in accomplishment and in spirit. It was one of the worst mismatches you are ever likely to see. Chelsea even appeared to take pity on them in the dying minutes. Clean through, Hazard tried a trick to score and poked the ball wide.

Townsend scored in the last minute. But don’t call it a consolation. The England winger did not celebrate his goal. He shook his head as he walked back to the centre circle. He looked as if he was still in shock.

Newcastle were flying to Spain for a warm weather training camp after this match. In the radio commentary box, one of their former defenders, John Anderson, made a weary joke of it. ‘I think a few of them are already there,’ he said.