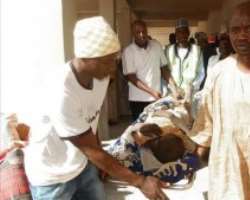 Rescue workers transport a victim of a suicide bomb attack at a refugee camp in Maiduguri, Nigeria, on Wednesday. (Image via AP Photo/Jossy Ola)

Two young women welcomed into a Nigerian shelter for people fleeing Boko Haram turned on their newfound campmates on Tuesday, the New York Times reports, blowing themselves up and killing at least 58 people ( Reuters puts the number at more than 60, while Al Jazeera notes it's upward of 70) and injuring 78. The suicide bombers were actually accompanied by a third female who balked at the last minute for a very personal reason.

“There were three female bombers who entered the camp around 6:30am disguised as displaced persons,” the head of the Borno State Emergency Management Agency said, per CNN . “Two of them set off their explosives … while the third refused after realizing her parents and siblings were in the camp.” The third suspect informed military officials that they were sent by Boko Haram, which was planning on using more females to carry out future attacks.

Boko Haram has indeed been tapping more women and girls for missions, as well as other methods: The Times documents an instance in which a bomb was hid in okra, and attackers have been told to pretend they're mentally ill.

Tuesday's bombing is said to be retribution for an attack on a Boko Haram market by Nigerian soldiers, who killed more than 100 Boko Haram members and liberated up to 1,000 women and girls being held as sex slaves, per the Times ; those freed were brought to the Dikwa camp.

Thanks to the efforts of new President Muhammadu Buhari, forces have driven Boko Haram out of many outposts, though that hasn't stopped the group from hitting well-populated soft targets. Meanwhile, in neighboring Cameroon, a pair of suicide bombers reportedly from Nigeria killed 10 and injured 40 at a wake Wednesday, per the AP . (Boko Haram isn't showing signs of slowing .)