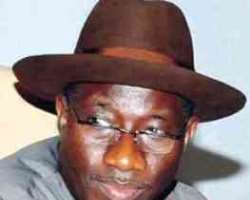 He signed the budget alongside the Nigerian oil and Gas Content Development Bill 2010, inspite of the non-resolution of the disagreement between the Executive and Legislature over perceived discrepancies in the Appropriation Act.

Grey areas in the version of the budget passed by the lawmakers, which the Executive described as 'discrepancies', had initially stalled the signing of the budget by Jonathan.

The two parties held extensive deliberations at the Akinola Aguda House, the Acting President's official residence in the Presidential Villa, on Tuesday night, after which it emerged that the budget would be signed.

However, in an address during the budget signing at the Council Chambers of the State House, Jonathan disclosed that the contentious issues were yet to be resolved.

But he said that the leadership of the National Assembly had agreed to resolve the problems.

Jonathan said, 'In November 2009, this administration presented a budget proposal to the National Assembly for their consideration and passage.

'This proposal, as subsequently amended, was for an aggregate expenditure of N4.4tn, with a deficit of N1.32tn, or 4.05 per cent of Gross Domestic Product.

'After due consideration of the budget proposal, the Legislature passed an Appropriation bill of N4.4tn, with a deficit of N1.52tn or 4.66 per cent of the GDP.

'However, we in the Executive have pointed out certain aspects of the appropriated expenditure which the leadership of the Legislature have agreed will be resolved.'

The 2010 budget is based on indices which reflected the government's assumptions for the fiscal year, including oil production capacity of 2.35 million barrels per day; benchmark oil price of $67 per barrel; and average exchange rate of N150 to a dollar.

Jonathan expressed the hope that if well implemented, the budget would accelerate national development.

The Acting President, who added that the office of the Minister of Special Duties would be empowered to monitor and evaluate all government programmes and policies, therefore enjoined ministers to ensure thorough implementation of the Appropriation Act.

He warned that failure to do so by the ministers would attract sanctions.

Jonathan said, 'It is with a deep sense of responsibility that I sign the 2010 budget so that this appropriated expenditure may be rapidly utilised to accelerate initiatives to enhance the pace of development of our nation.

'I sign this budget, authorising aggregate expenditure of N4.6tn, mindful of the many challenges facing the country and the need to intervene quickly to address these multifaceted issues.

'However, I am encouraged by our unwavering resolve and collective commitment to overcome any attendant adversity.'

He said, 'The cabinet, as recently reconstituted, understands the importance of delivering on this administration's promises to provide Nigerians with critical infrastructure in terms of power, efficient transport system, opportunities for food security and wealth creation, enhanced education and healthcare services, physical security and access to justice, sustainable economic development and political empowerment, security and development in the Niger Delta, and across the nation.

'I,therefore,urge the honourable ministers to ensure proper and efficient administration of their sectoral budgets.

'Consequently, increased emphasis will be placed on monitoring the deliverable by MDAs(Ministries, Departments and Agencies) by tracking the outcomes and outputs they achieve with the financial and other resources appropriated in the budget, over which they have stewardship.

'In this regard, the Office of the Minister for Special Duties will be structured and empowered to undertake the task of monitoring and evaluation of all government projects and activities.

'This administration will speedily move to identify and resolve impediments to implementation, rewarding excellence in performance and applying sanctions where necessary.'

The Minister of Finance, Dr. Olusegun Aganga, who spoke with journalists after the budget signing, allayed fears over government's ability to finance the budget deficit.

Asked to explain how the government intended to fund the N1.3tn deficit, he said, 'I think that has been made clear from the beginning.'

Aganga added, 'There are other sources of revenue which we are looking at; there were some mention of sales of some assets and it has been mentioned that we are going to raise a bond this year, we are going to the international capital market this year, of about $500m.

'But I think the most important thing we should understand is that in a recession, there is nothing wrong about spending, in fact if you look at any of the western world they all have deficit.

'The deficit is growing at an alarming rate.
'So, the most important thing for us is to make sure that in spending we get good value for the money spent, that it is spent in areas where we generate both social and economic returns, that is what is critical and that is why we should all be pleased that the Acting President made it very clear today (Thursday) that this administration is going to be heavily focused on the execution of the budget.'

Aganga also denied reports that the government intended to borrow about $915m from the World Bank to finance the budget.

He said, 'This is absolutely wrong; we are not borrowing a billion dollars to fund the budget.

'I think what they are referring to is something which we are working on with the World Bank.

'So it is not one billion dollars borrowing upfront; it doesn't work like that. It has nothing to do with the budget.'

The minister also dismissed reports that the government's commitment to its joint venture cash calls would have a dismal effect on the budget.

Aganga added that the Ministry of Finance would focus on three areas - managing the national revenue; enhancing the quality of expenditure; and managing excess revenue.

'My focus now will be on three major things, one is about the management of our revenue, which will make sure that there are no leakages; making sure that we risk manage whatever we need to risk manage.

'Then secondly, we are looking at enhancing the quality of spending. It is okay to spend but it is important that you spend wisely and people are held accountable.

'You may have heard what the Acting President said. He made it very clear that the minister in charge of special duties has been mandated to make sure that we get real value for money spent.

The signing of the budget was witnessed by principal officers of the National Assembly, the leadership of the Peoples Democratic Party, members of the Federal Executive Council, presidential aides, and other government officials.