Nine Arrested In Kano With N11.1m Worth Fake Dettol Soap 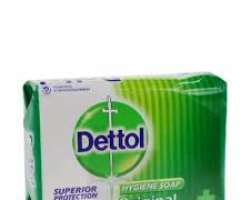 The Public Relations Officer of the state’s Police Command, DSP Magaji Majiya, who disclosed this to newsmen in Kano said the suspects were apprehended at the Sabon Gari Market in Kano following a letter of complaint from some concerned citizen in the state.

Imediately After receiving the letter, the ambush squad swung into action and raided the market where six retailers and three dealers were arrested he said.

He said that items recovered from the suspects included 1,301 cartons of the product, four cartons of soap valued at N11.1 million.

Majiya said as soon as investigation was completed, the suspects would be charged to court for prosecution.

He appealed to the public to continue to cooperate with security agencies in order to rid the state of criminals hideout in the state.