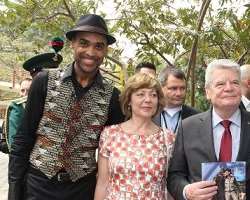 The German President, Joachim Gauck and his wife, Daniela Schadt, who are in Nigeria on courtesy visit have being meeting with some of Nigerian entertainers with dual citizenship.

First they met with controversial red carpet host, Denrele, during a dinner in Lagos and recently, they moved to meet with Nigerian-German artist Ade Bantu.

President, Joachim Gauck, made a visit to the the former colonial prison where the monthly Afropolitan Vibes concert series holds was seen by many as an endorsement of Ade Bantu and his band's efforts at establishing a live music event of international standard and repute.

Their meeting was also a reunion as Bantu had performed at the annual Citizens Party of the President at his official residence in Berlin, Germany in September 2015.