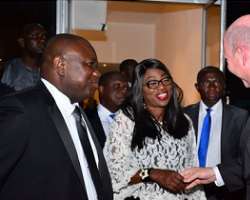 A lot of people are yet to know the in-depth story of popular event compere and TV host, Denrele Edun, who continues to create buzz around but smiles to the bank every week.

Denrele to a large extent has carved a niche for himself but he is not relenting in maintaining the crown for himself because he is just one of the most sought after red carpet host at events.

His works have not gone unnoticed as he was recently invited by the German Embassy in Nigeria to be a guest at the reception of the German's President, H.E Joachim Gauk and his wife, Mrs. Gerhild Gauck, in Lagos.

Remember that Denrele is also a German so don't ponder too much as he was privilege to have some photo session with one of the German dignitaries whom he describes as the tallest man in the room.
Aside the photo session, Denrele stated that other things he enjoyed most was the way his cup was continually filled as it never went dry.

The German leader and his entourage had decided to pay a courtesy visit to the Lagos state Governor, Akinwunmi Ambode at the Lagos state office where they discussed on issues bothering the state and how the two countries can work together.