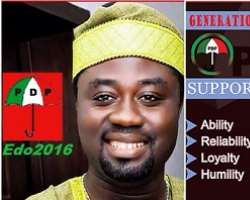 It is no longer news that husband to Nollywood actress Mercy Johnson, Prince Odi Okojie, is vying for political office in Edo state but what keeps making him important is the support he continues to enjoy from his people.

Prince Odi says he is being persuaded by his people to fight for PDP's deputy governor's slot in the coming election in the state as he was given a grand reception on his return to Uromi, Edo state yesterday February 8.

He was being welcomed like a king as people trooped out to greet him while he drove round town in his convoy but his wife Mercy, was not with him as she is busy caring for the kids.

With such a welcome, it is an affirmation that he has gotten the support of the people of his locality to contest for the position which he might likely win if they all come out to show him that love.