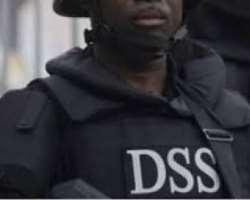 The Department of State Service on Tuesday announced the arrest of a 400-level student of Federal University of Technology, Minna, for being the operational arrowhead of the Islamic State of Iraq and Syria (ISIS) in Nigeria.

Abdussalam Enesi Yunusa, studying Information and Media Technology, was arrested in Kano. His arrest was sequel to available intelligence which indicated his terrorist antecedents and covert drive to indoctrinate and recruit susceptible youths in the country, Tony Opuiyo said in statement on behalf of DSS.

The DSS said that 'prior to his arrest, Yunusa had completed arrangements to embark on a journey to join an ISIS terrorist training camp in Libya, with other Nigerians whom he recruited for the 'Islamic State'. These recruits include the trio of one Muhammed Rabi'u, Yahaya Momoh Jimoh and Zainab Sunday.'

The DSS statement further reads: 'He was subsequently radicalized and became a member of an extremist cell, comprising of one Ibrahim and Abubakar Ligali, whom he revealed are currently undergoing terrorist training in Libya. He listed one Aminu and Ibrahim Jihadi (Nigeriene), as other ISIS agents operating in Nigeria and the West African sub-region. The cell was being funded by one Abu-sa'ad Al Sudani, a media expert with the extremist group using Western Union money transfers to fund the terrorist cell agenda.

'On 17th January, 2016, in Daura township of Daura LGA, Katsina State, another budding extremist cell affiliated to ISIS, was intercepted by the Service. One Ibrahim Mohammed Daura, Zaharadeen Salisu and five other elements of the proscribed extremist group, Ansaru, were arrested by the Service. This group was discovered in an active stage, as its members were already co-ordinating themselves for attacks in Katsina and Kano States.

'In the same vein, on 22nd January, 2016, one Obansa Salami, Ejide Tijani aka Abu Uwaise II, Mohammed Rabiu aka Ubida II, Zainab Mohammed and Abdulqadir Salisu Ahmad were arrested in Kano by this Service, while migrating to Libya, with their immediate families including infants, in a bid to join ISIS. This group was apprehended after painstaking monitoring of its network and plans.

'On 29th January, 2016, the Service arrested Mohammed Aliyu Ndakoin Kwara State. Ndako is a seventeen (17) year old undergraduate student of a tertiary institution in the State.

He was arrested sequel to credible intelligence on his plans with one Abdulkadir Salisu AHMAD a.k.a Daddy Tall, another student in Kano State, to carry out coordinated lone-wolf attacks on selected populated targets in Nigeria preferably worship centres or recreation venues. Suspect had hitherto been communicating with foreign extremist elements, while sourcing online terrorist training and support.' - Guardian.