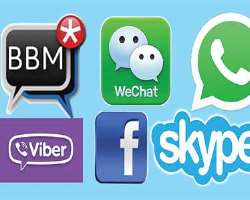 Activities of the Over-The-Top (OTT) players in the Nigerian telecommunications market will be coming under checks any time soon.

This is because the Nigerian Communications Commission (NCC) might soon marshal out a licensing regime through a regulatory framework for their operations in the country.

OTT players are platforms that deliver audio, video, and other media over the Internet without the involvement of a multiple-system operator in the control or distribution of the content.

OTT players include Facebook, Skype, WhatsApp, Viber, Blackberry Messenger (BBM) and WeChat, among others, are prime target in the impending regulation.

These players operate over the networks, delivering value to customers, but without any carrier service provider being involved in planning, selling, provisioning or servicing them; thereby implying that traditional telecommunications operators cannot directly earn revenue from their activities.

Examining the evolution and development of OTT incursion into the telecommunications market, NCC, in a 23 page document titled: 'An Overview of Provision of Over-The-Top (OTT) Services' noted that the growing influence of these platforms posed apparent threats to the operation of traditional telephone networks such as MTN, Glo, Airtel, Etisalat and Visafone, among others.

NCC listed OTT services to include services such as Internet Protocol (IP) telephony, live streaming and other social media applications.

Already, the Chairman and Founder Bharti Airtel, Sunnil Bharti-Mittal, has lent his voice to calls for checks on the operations of OTT players.

'If you are subjecting telecoms operators to KYC, licence fees, it should be uniform. Regulators should allow the best technology to compete, and then the fourth industry revolution would have been created. The industry is as it were 10 years back, the OTT has seriously encroached on our services', Bharti-Mittal stressed.

The commission explained that OTT is a service based on the Voice over IP communication protocol (VoIP), a disruptive technology that is rapidly gaining ground against traditional telephone network technologies, adding that the increase in uptake of mobile VoIP services provided by apps such as Google, Facebook, Skype, Viber and WhatsApp, among others, telecoms operators 'face the risk of eroding revenues and profitability.'

The report noted that 'Many traditional telecommunications service providers are of the opinion that traditional telephony and SMS revenues are under threat from newer, IP based alternatives like WhatsApp, Skype, Viber, among others. Similarly, third party web content and social networking companies such as Google and Facebook are increasingly generating huge revenues and driving high levels of data traffic, which ride on the broadband networks of traditional telecom operators.

'To further worsen this issue, the traditional operators still have to make significant investments in upgrading their networks to handle the increasing volume of data generated by the same providers of OTT services. 'Most traditional telephone network service providers, therefore, argue that unless there is a revenue flow to them from such services, they do not have an incentive to continue to maintain or upgrade the networks.'

According to the report, while, to a large extent, this argument may be true, traditional telephone network providers need to start exploring more innovative and cost effective ways of competing with these OTT service providers. - Guardian.