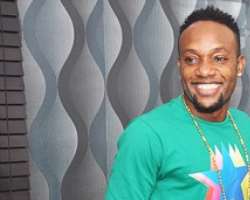 Music artiste, kcee a.k.a Limpopo master, has been under blast by fans after he shared a photo of himself putting on a multi-color outfit.

Kcee is someone who loves to take risk when it comes to fashion, not all guys are bold enough to rock different colors.

However, some fans who apparently didn't like the outfit came hard on him, as some called the outfit up Nepa and shine shine bobo. Some called him rioting boss, while some asked him to hire a wardrobe consultant.