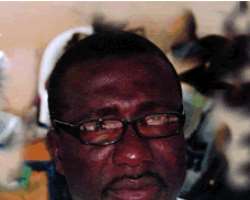 Ahead of the March 19, 2016 Re-run State and National Assemblies Elections in Rivers State, Chairman of the Peoples Democratic Party (PDP) in the State, Bro. Felix Obuah has called on Rivers people to reject all the candidates of the All Progressives Congress (APC) in the coming polls.

The Chairman stresses that the White Paper Report which indicted the administration of former Governor Chibuike Rotimi Amaechi underscored the fact that members of the APC are looters and fraudulent, and therefore should not be entrusted with public office.

The statement which was signed by Obuah’s Special Adviser on Media, Jerry Needam, emphasizes that Rivers people were yet to come to terms with how billions of Naira belonging to the people were misappropriated by the Amaechi regime with reckless abandon..

Bro. Obuah further notes that the fleecing of billions of Naira of Central Bank loans meant for the development of small scale businesses of Rivers people by the APC administration of Governor Amaechi was still fresh in mind, warning that APC members cannot again be trusted with the management of State resources.

Most worrisome, according to the State PDP Chairman, are the lamentations by the National Chairman of APC, John Oyegun over the resources of Rivers and other Niger Delta States, adding that this development has further exposed the antics of the APC.

The PDP chairman reiteratesthat what the PDP and the generality of Rivers people deduced from Oyegun’s body language was that the APC are after the resources of Rivers State and not the development of the State.

Bro. Obuah expresses joy that the Supreme Court judgment has engendered peace and tranquility in the State, noting that the only way to sustain the peace was to reject the APC and all their antics.

The PDP Chairman also warns the people to be wary of the APC candidates and leaders, who, he maintains, are aiming to grab the common wealth of Rivers State and destabilize the State.

Similarly, the PDP Chairman reiterates that all those who claim to have left the Party for other political parties are not members of the PDP as there is no record of their membership of the PDP in the State.

Bro. Obuah discloses that apart from the fact that the Secretariat of the PDP does not have such records of the alleged decampees, all those who claim to have defected do not have any value and their leaving is inconsequential to the success of the PDP, adding that they would definitely not be able to make any positive impact in any party they defect to.

He urges the people of the State not to be deceived by those non existing claims by less important and insignificant persons, saying the APC is only a Party with incompatible and combustible elements doomed to finally crash in the re-run elections.

Obuah again thanks all Rivers people for their sustained support and acceptance and further appeals to them to continue to vote for All PDP candidates during the election for the Party to deliver on its electioneering promises.