Peter Okoye Meets With Chelsea Stars After Draw with Man U 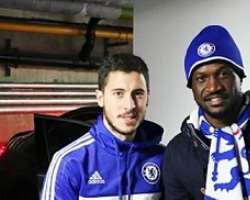 Peter Okoye of the P-Square fame is not taking things easy with his football management company as he continues to invade high clubs like Chelsea probably to have some of his young lads introduced to the club's feeder's team.

Recently, the singer had toured around with Cameroonian striker, Samuel Etoo and now he was recently in London, with where he posed with some Chelsea football stars after Manchester United's match yesterday.

Well, let's see where all this trips with some stars will earn his players as he seems not to take anything for granted at ensuring his boys attain stardom and represent their country in the future.

He met with the likes of Eden hazard, Mikel Obi, Lotus Cheek, Matic, Willian and Courtois, Bertrand Traore and Baba Rahman and Oscar.