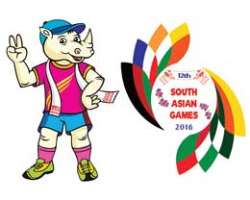 Guwahati: As northeast India is preparing for the 12th South Asian Games 2016, to be held in Guwahati and Shillong on 5-16 February 2016, both the capital cities have turned into fortress under security nets.

of world’s precious one-horned rhinoceros, which has sizable

‘Ai Prithibi Ek Kringagon….’ has been picked up from the immortal

Meanwhile, the security agencies have already expanded its nets to all

sensitive locations to make the first biggest ever international

minister Tarun Gogoi has ensured a ‘fool-proof security system’ for

the mega event ensuring smooth conduct of the Games.

“The government has arranged fool-proof security for sportspersons as

well as spectators for the smooth conduct of the games,” said Gogoi

after attending a review meeting with the representatives from the

administrators to discuss the last minute preparations of the event.

co-operate with the sportspersons and officials who are coming from

will.
Guwahati city police commissioner Mukesh Agarwala, while talking to

the media persons, elaborated that over 90 hotels, guest houses and

resorts would be used for the Games, where the security personnel

would be deployed for 24 hours a day during the occasion. He also

Assam, has also come out with a statement welcoming the event saying

that the participants from the south Asian nations would ‘find our

region have similarities with their own lands’ that should make them

feel at home.
“The sporting spirit quality in human interactions is recognized as an

friendship and create new ones,” said the statement issued by Ulfa (I)