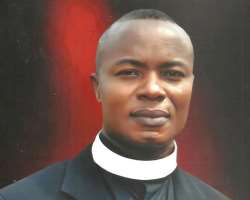 The Benin-based cleric who faulted the malicious report said he never made such statement as claimed by The Sun Newspaper.

Describing it as false and baseless, Prophet Iwuala wondered the level of desperation pulled by the tabloid. He added that there was never a time he said the former governor will be in any discussion with the Federal Government to make it succeed.

The General Overseer of the Redemption Tabernacle Church of All Nations pointed out that his 2016 prophecy never had political statement attached. He further said, “since the former governor could involve me into such embarrassment, I prophecy, he will never succeed in politics again.

“If I be a prophet of God, may my declaration as against him begin to manifest. His act is dubious, desperate and wicked. People, especially Abians should avoid such demonic and evil man. He can’t be a good leader.

“On all those in Igbo land, so he is the only one called by God? A man with questionable character cannot be called by God. Where is Abia today? Was it not out of his selfishness that TA Orji emerged? Orji Kalu will never see good politically again,” the prophet declared.

The highly revered cleric in Benin further urged all to disregard such report as published by Orji Uzor Kalu’s owned newspaper platform, even as he added that his lawyers are on the matter to file charges.