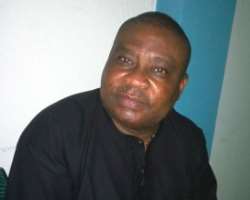 The Department of State Services has interrogated a former Secretary of the Peoples Democratic Party in Ekiti State, Dr. Temitope Aluko, the PUNCH newspaper reports.

According to the newspaper,   Aluko arrived at the national headquarters of the service in Abuja on Friday where he was interrogated on the allegation of rigging, which he made against Governor Ayodele Fayose of Ekiti State and the state chapter of the PDP.

The former secretary had told the nation last week that he and others helped Fayose to rig the June 21, 2014 Ekiti State governorship poll.

He also alleged that former President Goodluck Jonathan gave Fayose $2m for the PDP primary and $35m to prosecute the governorship election.

The governor, however, didn't dispute the claim of the money in his reaction but asked that the PDP secretary be prosecuted for perjury, saying that the latest allegations were against Aluko's testimony at the election petitions tribunal, where he was the star witness.

The state government on Wednesday last week dragged Aluko before a magistrate court in Ado Ekiti, the state capital.

Since then, Aluko, who claimed that Fayose betrayed him by not naming him his chief of staff, had gone underground.

Investigations by the Punch  in Abuja on Saturday and Sunday showed that Aluko was asked by the security agency to provide evidence of his allegations.

Aluko, it was gathered, made copies of the allegations he made against his former bosom friend, who he claimed he had known for 40 years, to the DSS.

The newspaper further reports that among documents he submitted as proofs was the list which contained the names of the three persons from each local government that he alleged were put together by the governor's team who identified weak points in each local government, the roads, strong opposition polling units and names of key opposition leaders.

He was also said to have provided details of members used by the PDP to weaken the opposition during the election.

According to Punch sources at the headquarters of the service,  Aluko was also asked to provide insight into his claim that the PDP used 1,040 soldiers and another 400 unrecognised soldiers, who he said were illegally recruited from Enugu to work for the party in the election.

The source said, “He (Aluko) is also providing details on his allegation that special stickers were provided for the vehicles used.

“He is also telling us what he knew about the procurement of black materials for the hand band for the operators of the strike team and the members of the 44 special strike teams.”

The report added that the service was relying on the list to enable it to get those listed as their telephone lines were also said to have been included.

Each of the strike team, which was said to have had a Hilux, was made up of 10 security personnel with a soldier as the team leader.

Members of the team were said to have been drawn from the DSS, NSCDC, Immigration Service and riot police.

“Definitely, the names of those listed there, especially those serving with us, would be invited for interrogation,” the source added.

The Punch could not get an official response from the DSS to this story as the service has not appointed a spokesperson since the assumption of office of its Director-General, Mr. Lawal Daura.

It was gathered that Aluko was not arrested by the operatives, but was “helping them in their investigations,” and that he was said to be in what our source described as “safe hands.”

Fayose has, however, said he would not be the one to enforce the magistrate's court's order on Aluko.

The governor, who spoke through his Chief Press Secretary, Mr. Idowu Adelusi, said the judiciary that made the order should be able to make the police to enforce it.

Adelusi, in a text message to our correspondent on Sunday, said, “It is the court that issued the bench warrant, not the governor.

“The court has only ordered the police to enforce the arrest. It is left for the police to execute the order. It has nothing to do with the executive.”

Meanwhile, human rights lawyer and Senior Advocate of Nigeria, Femi Falana, has said Fayose can be prosecuted if he is indicted by a panel set up by the military.

The report of the panel was submitted to the Chief of Army Staff, Tukur Buratai, in January.

According to the Army Headquarters, the panel recommended the compulsory retirement of two officers, while three other officers were recommended to lose their command and one was recommended for prosecution as a result of financial gratification.

Falana told our correspondent that if Fayose was indicted by the panel, Aluko could be used as a prosecution witness by the Federal Government.

The SAN added, “The army authorities had investigated the fraudulent governorship election purportedly won by Mr. Ayo Fayose in June 2014. It has been confirmed that it was not an election but a coup executed by armed soldiers, led by one (Brig) General (Aliyu) Momoh.

“The panel, which investigated the shameful event has recommended the dismissal of a number of military officers and further investigation of others by the EFCC over the money illegally collected by them for the purpose of subjecting voters to horrendous harassment and brutalisation.''

Falana noted further that once the panel report was released and the investigation of the EFCC on the alleged “N4.8bn, which was criminally diverted for the election, is concluded, all the indicted suspects will be arrested and prosecuted.”

When asked whether Fayose could be prosecuted if indicted despite the immunity he enjoyed as a governor, he said, “There is no immunity for impunity as far as electoral malfeasance is concerned. In the cases of Obi v Mbakwe, Alliance for Democracy v Ayo Fayose and Amaechi v INEC, it has been established that governors cannot hide under the immunity clause to commit electoral fraud.

“By the strict interpretation of Section 308 of the Constitution, no court process can be issued or served on a governor. But because immunity cannot be pleaded or invoked to cover electoral fraud, elected governors are served with court processes and dragged before the court to answer allegations of electoral malpractice.”