1 million extremely poor Nigerians to be paid N5000 monthly from this year: FG 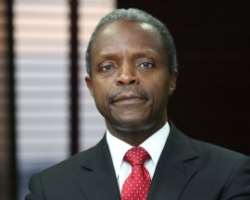 The picture of the Federal Government’s social security programmes are beginning to shape up.

One million extremely poor Nigerians would be direct beneficiaries of the N5,000 monthly cash transfer, the government said in a a statement issued by the Office of the Vice-President . A total of N60 billion would be directly transferred to the one million extremely poor Nigerians, according to in accordance to President Muhammadu Buhari's vision of building human capital.

The statement by   Mr. Adeolu Akande, Senior Special Assistant, Media in the office of the Vice-President, said the payment would commence once the budget is approved by the National Assembly.

Besides that, the government unveiled  another five social interventions that include the provision of one meal a day to school pupils in some selected states, which  include the 500,000 direct jobs, which will see unemployed graduates being trained and deployed as volunteer teachers in their communities while still prospecting for jobs in their chosen professions.

It also includes a youth employment plan which will see the training of 370,000 non-graduates youths in different skills and vocational programmes.

“The recruitment of beneficiaries into the volunteer teaching jobs and the skill acquisition training scheme for non-graduates would be done on state basis, including the FCT and opened to all Nigerians of different shades,” Akande said.

Another initiative also revealed is the micro credit scheme where one million Nigerians, mostly small scale traders, artisans and market women, would get a one-time soft loan of N60,000 each through the Bank of Industry.

And finally there is the free education plan for students of Science, Technology, Engineering and Mathematics, STEM, where government will pay tuition for 100,000 students. Explaining the administration's determination to positively impact the capacity of Nigerians through the unprecedented intervention, Akande disclosed that at no time in the nation's budgetary history had the Federal Government made a specific vote of such volume for social welfare.

“Even economic historians now say that not only is the half a trillion Naira vote unprecedented, but it is also the greatest service ever done to the Nigerian state and people by any federal government administration,” Akande said.

He noted that the six social safety plans would reduce high levels of poverty and vulnerabilities, while also increasing Nigeria's Human Development Index on the global UN rankings. “The President's vision is to increase investments in human capital to guarantee security for all, employment and improved well-being of the people,” the Vice President's media aide added. He disclosed that the Presidency was aware that past attempts to address poverty had suffered because of insufficient political will, presence of various UN-uncoordinated initiatives and poorly targeted beneficiaries, among other factors, and was working to avoid the pitfalls.

According to Akande,  for the Conditional Cash Transfer, CCT, where one million extremely poor Nigerians will receive N5000 monthly in 2016, the money would be paid directly to the beneficiaries through a payment system that is being worked out.

He said the World Bank and the Bill Gates Foundation were collaborating with the Presidency to develop an efficient payment system. All together, about N60 billion had been estimated to be paid out to extremely poor Nigerians. And the implementation of the programme starts once the budget is passed.