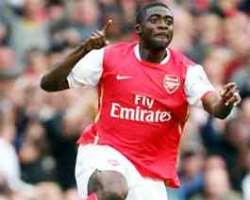 Kolo Toure
Kolo Toure has urged Emmanuel Adebayor to avoid further controversy and focus on the job at hand for Manchester City when he returns to Arsenal for the first time on Saturday.

Emmanuel Adebayor angered Arsenal fans after celebrating in front of them during City's win over the Gunners at Eastlands.

Adebayor joined City in a £25 million transfer last summer, citing a poor relationship with the Arsenal support, and further antagonised his former fans when running the length of the pitch to celebrate in front of them after scoring in City's 4-2 win over the Gunners in September.

Adebayor was fined £25,000 and given a two-match suspended ban by the Football Association for his behaviour, as well as being hit with a three-match ban for stamping on Robin van Persie in the same game.

While Toure, Patrick Vieira and Sylvinho, if he plays, are likely to receive a warm welcome from the home supporters at Emirates Stadium at the weekend, the relationship between Adebayor and Arsenal is a fractious one and he will likely be targeted for abuse.

Toure and Vieira, two members of Arsenal's 'Invincibles side' that went the season unbeaten in 2003-04, have both spoken to Adebayor in the build-up to Saturday's game in order to avoid a repeat of the scenes that marred their victory earlier in the season.

City approach Saturday's game in fifth place, two points behind Tottenham, and with Champions League football at stake, Toure is desperate to beat his former side, who are suffering from a lengthy injury list.