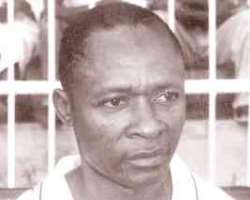 Coach Fatai Amoo
New Shooting Stars Sports Club coach, Fatai Amoo, will be on the bench when the Ibadan side takes on Rangers in Enugu in their Week 29 Globacom Premier League game on Sunday.

The home-based Super Eagles assistant coach returned to the club he once coached when it was seeking promotion to the Premier League three seasons ago on Monday as replacement for coach Phillip Boamah, who was sacked in December.

According to the 3SC General Manager, Mutiu Adepoju, in a telephone interview with our correspondent on Wednesday, the club will give Amoo the necessary support.

Adepoju had acted as coach since Boamah's departure but the team found it difficult to pick maximum points at home. Apart from the win in Abeokuta against Gateway and the draw in Bauchi against Wikki Tourist, the team lost all its away matches.

With 10 matches to go, 3SC is facing is a possible relegation from the Globacom Premier League after bagging 33 points from 28 game to place 16th in the table.

Amoo was coach of the club when it was seeking promotion to the Premier League from the National Division One League.

He joined Sunshine of Akure from where he was appointed assistant coach of the Super Eagles.

Speaking after the unveiling in Ibadan, the club's General Manager, Mutiu Adepoju, described Amoo as one of the best coaches in the country.

The former Super Eagles midfielder said, 'Amoo has experience on his side and it will come very handy for us at this time.

'We have gone through a proper process to arrive at our choice, and we sincerely hope his appointment will usher in a new beginning for the club in terms of results.'

Adepoju said the club management did a thorough screening of coaches shortlisted before it arrived at Amoo's choice.

'We went through a pain-staking process to arrive at our choice and we sincerely hope his appointment will usher in a new beginning for the club in terms of results,' he said.