I don't know why I came to rule now –Buhari 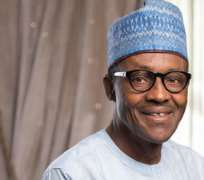 President Muhammadu Buhari on Friday said that with the quantum of problems his administration inherited, he sometimes wondered why he had to seek power at this time.

Buhari spoke in London while addressing members of the Nigerian community in the United Kingdom.

Our correspondent obtained a transcript of the President's address to the gathering on Friday.

Buhari said he wondered why oil, which used to sell for over $140 per barrel, would reduce to $30 per barrel during his time as the President.

Notwithstanding the problem, however, Buhari said he kept praying to God to be merciful to the over 170 million Nigerians who are exposed to poverty, illiteracy and other social ills.

'But I say why me? Why is it that it is when they have spent all the money, when they made the country insecure that I returned?

'Why didn't I come when the treasury was full? Oil price was over $140 per barrel and when I came, it slipped down to $30. Why me?

'I keep on praying to God to pity Nigeria and its over 170 million people who are exposed to climate change, illiteracy and poverty.'

The President, however, said his administration had succeeded in mopping up over N2.2trn as of January through the Treasury Single Account arrangement.

He said although the TSA was introduced by the administration of former President Goodluck Jonathan, that administration could not implement it for reasons best known to its officials.

He said his administration decided to implement the arrangement when he came on board and discovered that the country was broke.

The President said, 'You know the condition we are in now. I am sure with demands from home, in spite of what your effort is, you know we are really in trouble.

'But when we came and we found out that we were broke, we said this is the way to do it.

'I will tell you two examples to convince you. Firstly, the Nigerian National Petroleum Corporation had more than 45 accounts. Ministry of Defence had more than 70 accounts. Tell me which Accountant-General can trace all these accounts?

'So, we imposed TSA. By the end of December, coming to January 2016, we mopped up more than N2.2trn which would have been used through bureaucratic system to raise vouchers and sign cheques so that they don't go into the next budget.'

The President said Nigeria owed the United States and Britain a lot of appreciation for stopping the former administration from rigging the last presidential election.

He recalled that ahead of the elections, the former National Security Adviser, Col. Sambo Dasuki (retd.), urged the service chiefs and the then Inspector-General of Police to tell officials of the Independent National Electoral Commission that they could not guarantee their safety during the polls.

He said the then Chairman of INEC, Prof. Attahiru Jega, however, gave a comprehensive report at a meeting of the National Council of State, where he said he would be able to deliver, at least, 60 per cent free and fair election.

The President said as of that time, the country had never gone beyond 45 per cent.

He said it took the intervention of US Secretary of State, John Kerry, for the last administration to conduct credible election.

He said, 'Then we insisted that election must be done according to the constitution.

'At this point again, I must hasten to thank the United States for sending the Secretary of State, Kerry, to go and read the riot act to the previous government and speak to Prof. Jega, the Chairman of INEC and speak to us as opposition that the US would not tolerate any election outside the Nigerian constitution.

'They maintained the pressure from that date until after the election and the formation of the new government.

'I think Nigerians honestly should thank the US for this. The same thing with Britain, they used all their experience and their powers to make sure that the Federal Government did not rig the last election.

Buhari said the issue of Diaspora voting had been coming up in all the countries he had visited since the inception of his administration. – Punch.