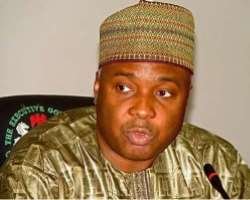 The Supreme Court on Friday dismissed the appeal of the Senate President, Dr Bukola Saraki, against the judgment of the Appeal Court on his trial by the Code of Conduct Tribunal on charges of false asset declaration.

A seven-man bench, led by the Chief Justice of Nigeria, Justice Mahmud Mohammed, gave the judgment that the CCT was properly constituted to exercise jurisdiction over Saraki's trial and has jurisdiction to try criminal matters.

According to Justice Onnoghen,  the provisions of its enabling laws and the Constitution conferred the tribunal with the quasi-criminal jurisdiction and thus could validly issue bench warrant.

He posited that the Administration of Criminal Justice Act 2015 was applicable to the proceedings of the tribunal.

The Supreme Court justice also refused to buy Saraki’s claim that  he was not properly served with the charges.

It is his view  that the charges filed before the CCT before the appointment of the Attorney-General of the Federation were valid.

He also noted that there was an attempt by Saraki to intimidate the ‎CCT by claiming that it disobeyed the order of a Federal High Court barring it from continuing with the proceedings pending the determination a suit filed by the Senate President to challenge the trial.

“I have looked at the records, there is no where such orders was made,” Justice Onnoghen ruled.

The CJN and other Justices on the panel agreed with the judgment.

The apex court had adjourned till February 5, 2016 to determine the appeal seeking to quash charges against the Senate President, after it entertained arguments from both Dr. Saraki and the Federal Government in December 2015.

The Court of Appeal in Abuja on October 30, 2015, affirmed the jurisdiction of the CCT to try him and the competence of the charges of false asset declaration preferred against him by the Federal Government.

The Federal Government leveled a 13-count criminal charge against the former Kwara State Governor before the Code of Conduct Tribunal (CCT) over alleged false declaration of assets.

Saraki was accused of deliberately manipulating the assets declaration form that he filled prior to his assumption of office as the Senate President, by making anticipatory declaration of assets as well as operated foreign bank account while in office as a public servant.

With this judgment by the Supreme Court, the trial of the Senate President before the CCT for alleged false asset declaration is expected to resume at the CCT soon.