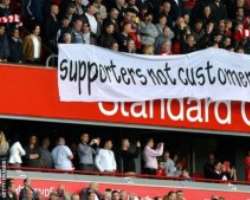 The Spion Kop 1906 group – backed by the Spirit of Shankly (SoS) – have suggested fans leave their seats in the 77th minute in protest at the £77 top-priced ticket in the new main stand.

The club have announced the increased price, up from £59, for next season.

An SoS statement expressed its anger at “no explanation” from the owners.

The statement added: “The outcome is extremely disappointing and a missed opportunity for Liverpool to lead in a fairer approach to ticket prices.

“We believe it is right and fair to lower ticket prices in order to sustain our support and subsequently the atmosphere inside Anfield.”