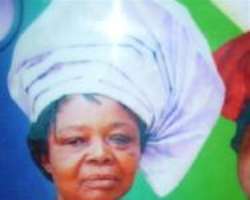 Mrs. Ifenyinwa Okafor, daughter of a 62-year old Mrs. Keziah Umeh, who was kidnapped on 12 April at Egbe Road , Kano, narrates to newsmen how the mindless kidnappers killed her mother and dumped her in a private hospital after collecting a ransom of N2.2 million.

“I asked him who he was and he told me that he knows all of us, he even mentioned some of our names. At that point I was confused and decided to open the door and let him in.

“He then told me that they were looking for mama to help them connect my younger brother who was preparing for an engagement party. Based on his explanation, I realized that I was not the right person to answer such questions from him, and I decided to let him see mama to explain himself better.

“Immediately he left, I climbed up the stairs. I did not see the boy again, when I went to the corridor to look for him, I saw one Golf car and that might have been the car the young man entered and they drove off.

It was later my husband called me that his in-law wanted to see him. I asked him what for and he told me he would communicate with me later.

“My husband then called me and told me what happened around 1 p.m. on Monday, that the people who came to the house with that wine inside the leather told people they met in the house that our younger brother told them that the sister has delivered a baby, that they were there to congratulate them.

“According to her, they then opened the door for them, entered, sat down and were offered Malt to drink. One of them finished his, while the other didn't. Some minutes after they left the sitting room, one of them suddenly came back and said they forgot their car keys.

“However in the process of searching for the car keys, they brought out their guns, told them they should surrender all their money, saying they were sent to eliminate them. My sister broke down.

“They told my sister to go inside and bring them all her money. At that time, she was enveloped with fear and had already told my mother to lie down, while they tied the hands and legs of the houseboy like a goat awaiting slaughter. They covered my sister's mouth with wrappers, tied her hands and ordered my mother to go with them.

“However, it was in the evening they called us, demanding for a ransom of N35million. At that point, my brothers were aware of who they were and started negotiating with them.

“In the process of negotiation, they agreed that they can only collect N5million. We told them that we can only afford N2million, they disagreed instantly, and later accepted the amount with the promise to settle the balance later, in which they consented.

“By then, my mother had already been abducted by the two young men, we had no option than to start pleading with them. My mother who is diabetic, then agreed to top it with N150, 000, with an extra N50, 000 to enable them release her.

“At a stage, since we know the kind of woman we have that she is a diabetes we decided to text her medicine to them so that they can buy it and gave it to her. I know my mum that she can not stay under a very intensive condition, at times if it was so hot; we used to pour cold water on head.

“They then told us that my sister should bring the money to them, they don't want any other person---that if we involve a third party, we are doing everything at our own risk, if eventually the information is leak.

She further narrated that later in the night, “they called us to come and take our mum at one hospital at Yankaba area, the Shamat Clinic, along Hadejia road, Kano . When my brother got there, she was already dead, they asked the Doctor what happened, the Doctor told them that when some boys brought the old woman, they were shouting 'our mother, our mother is fainting.

“The Nurse on duty admitted my mother, laid her on the bed and tested her and said the woman does not have pulse again, there and then, they started shouting and said they wanted to call their brother at home.

“The Nurse told us that was how they disappeared. So, may be, that was when they called my brother to come to Shamat Clinic for him to come and pick my mum,” adding that they later took the corpse to Aminu Kano Teaching Hospital's morgue.