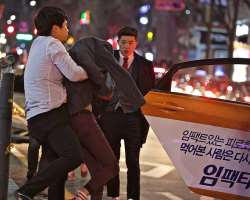 • South Korea consumes more liquor than anywhere else in the world

• Estimated 1.5m alcoholics
• US$20 billion in social costs to health per year

South Koreans drink more liquor than anywhere else on the planet, according to an upcoming documentary on Al Jazeera. 101 East: South Korea’s Hangover travels to Seoul to experience the nightlife in this work hard, party harder culture, as well as the fallout after closing time.

Presenter Steve Chao explains, “The government estimates one and a half million Koreans are alcoholics – that’s twice the worldwide average… Americans consume on average about three shots of hard liquor a week. Russians six. Here in South Korea, people per week down a total of fourteen shots… ”

South Koreans drink seven million bottles of Soju – every night. The drink of choice in South Korea, Soju is a fermented-rice spirit with an alcohol content of 20 percent.

With the cost of policing drunks and medically treating them topping 20 billion US dollars last year, 101 East: South Korea’s Hangover asks whether the cap can be put back on the Soju bottle.

South Korea’s Hangover screens on Al Jazeera English on 7 February 2016 at 1830 CAT on 101 East, Al Jazeera’s multi-award-winning weekly current affairs programme focusing on a diverse range of stories and investigations from across Asia and the Pacific.