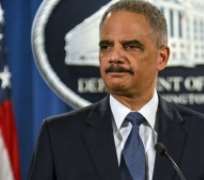 The legal tussle between Nigerian regulators and MTN, Africa's largest mobile operator has taken yet another turn. According to reports , the telecoms company has hired Eric Holder, the former US attorney general, to help it fight a record $3.9 billion fine imposed by the Nigerian Communications Commission for failing to disconnect unregistered sim cards.

Last October, MTN was slapped with an initial $5.2 billion fine which was later reduced by 25% to $3.9 billion. The telecoms giant has sought to overturn the fine by challenging the legal authority of Nigeria's regulator to impose the fine. Nigerian authorities then sought to freeze MTN's accounts saying the company could repatriate its funds from the country before the fine is imposed but, in a rare win for MTN, the court turned down the request .

The case has been adjourned till March 18 before which both parties will be free to reach an out-of-court settlement. But the arrival of Holder could signal MTN may not be be expecting both sides to reach agreement.

Holder served as US attorney general from 2009 until last April and in his role was involved with major settlement cases (paywall). He returned to a role as partner at Covington and Burling, the Washington DC law firm he worked for eight years before being nominated by president Obama. MTN is hoping Holder's experience can help it resolve a sticky situation.

MTN's fine was born of frustration by the Nigerian government with the telecoms company's inability to register all active SIM cards with known users. The government believes this has created a major security risk in dealing with Boko Haram insurgents and other threats around the country.

News of the fine has hit the company hard. Following the initial announcement, MTN's company's share price fell by 12% , its biggest one day decline since 1998 and it has had major management reshuffles including the exit of its group CEO and the heads of its Nigeria operations.