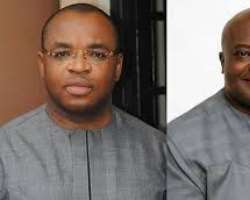 The Supreme Court on Wednesday upheld the elections of Governor Udom Emmanuel of Akwa Ibom State and Dr. Okezie Ikpeazu of Abia State. Significantly, the apex court veered from the earlier positions of the Court of Appeal, which had earlier nullified Emmanuel’s election, while ceding victory to Ipeazu’s challenger, Alex Otti.

A seven-man bench, presided over by the Chief Justice of Nigeria, Justice Mahmud Mohammed, unanimously affirmed the governors' elections after upholding their separate appeals against the judgments of the Court of Appeal, which had ordered their removal from office.

Both Emmanuel and Ikpeazu,  contested the elections on the platform of the Peoples Democratic Party on April 11, 2015. .

The court while giving the ruling validating the April 11 governorship election however deferred reasons for its judgment to a later date.

It said detailed reasons for the verdict would be provided on February 15.

The Court of Appeal sitting in Abuja had on December 18 nullified the Akwa Ibom State governorship election of April 11, removing Mr. Emmanuel, from office.

Mr. Emmanuel's election was challenged by the candidate of the All Progressives Congress, Umana Umana.

At the election tribunal, Mr. Emmanuel of the Peoples Democratic Party, had secured partial victory, with the election cancelled only in 18 out of the state's 31 local government areas.

The tribunal had ordered a rerun.
Mr. Emmanuel had challenged the ruling, insisting he won in all 31 LGAs.

The APC candidate, Mr. Umana, also appealed against the ruling, seeking a total nullification of the election.

But a five-man panel at the Court of Appeal dismissed Mr. Emmanuel's argument, and cancelled the entire election.

The appeal court had said the tribunal was wrong in its refusal to comply with section 179 (2) of the Constitution.

The court said having agreed with the evidence of principal witnesses, video evidence, and evidence from state collation agents, the tribunal should have concluded that there was no collation and that votes were merely allotted.

The tribunal was wrong in failing to nullify the entire election, the court ruled, setting aside the judgement of the tribunal in the 13 LGAs.

The appeal court then ordered the Independent National Electoral Commission to conduct fresh election within 90 days.

That verdict has now been upturned by the Supreme Court, and Mr. Emmanuel can now breathe a sigh of relief.

The Supreme Court late on Wednesday upheld the election of Dr. Okezie Ikpeazu as the governor of Abia State.

In like manner, the Court of Appeal had upturned the election of Ikpeazu, declaring the candidate of the All Progressives Grand Alliance, Dr. Alex Otti, as validly elected.

Ikpeazu, the candidate of the People ' s Democratic Party then proceeded to the Supreme Court to challenge the ruling of the Court of Appeal.