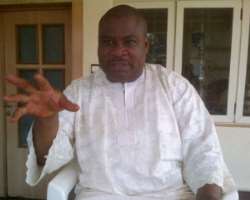 A Chief Magistrate Court in Ado-Ekiti, the Ekiti State capital has ordered the State Commissioner of Police to arrest the former State Secretary of the Peoples Democratic Party (PDP), Mr Temitope Aluko over alleged perjury.

Chief Magistrate Adesoji Adegboye gave the order on Wednesday, upon a Motion Ex-parte number MAD/10cm/2016, filed by the Ekiti State Government against Mr Aluko and the State Commissioner of Police, pursuant to Section 117 of the Criminal Code Law, Cap C16, law of Ekiti State 2012, Section 79 of the Ekiti State Administration of Criminal Justice Law 2014 and Section 23 (D) of the Magistrates' Courts Law 2014.

In the Motion, which was filed and moved by the State Director of Public Prosecution (DPP), Mr Gbemiga Adaramola, an order of the court was sought to issue warrant of arrest against Mr Aluko to be executed by the State Commissioner of Police for the purpose of committing him (Aluko) for trial for the offence of perjury. Chief Magistrate Adegboye said the order was granted as a means for the first defendant (Aluko) to attend the court for defence.

The matter was premised upon an application to the State Attorney General by a lawyer, Mr Sunday Olowolafe, calling for the prosecution of Mr Aluko for alleged perjury.

The legal practitioner said; 'I hereby apply to your office that Dr Temitope Kolawole Aluko be arrested and sued for perjury in view of the interview recently granted on Channels Television by 8:00pm on Sunday 31 January, 2016.

'The said Dr Temitope Kolawole Aluko now recanted the evidence he gave in the cause of the hearing of the Ekiti State Governorship Election Petition as a star witness even up to the Supreme Court. The Certified True Copy of the State on Oath, evidence of Dr. Temitope Kolawole Aluko in Court on the 12/11/14 and Nigerian Tribune and The Punch newspapers of Monday, 01/02/2016 that reported the interview granted are hereto attached.

'It is to be noted that if this act (Perjury) is not looked into, it will definitely defile the cause of justice and consequently rubbish the judicial proceedings.'

In the affidavit filed in support of the motion ex-parte by Special Assistant to the State Governor on Public Communications and New Media, Lere Olayinka, he said Mr Aluko, who was a witness before the Governorship Election Petition Tribunal sworn to a Statement on Oath on August 4, 2014 wherein he stated that the Election was not only free and fair, but devoid of violence, thuggery, hooliganism, snatching of ballot boxes, and related forms of electoral disorderliness.

Olayinka further averred that Mr Aluko tendered and adopted his Statement on Oath on November 12, 2014 and further gave evidence under cross examination.

He stated that all what Aluko said on Channels Television on Sunday, January 31, 2016 were contrary to and opposite in direction to his evidence before the Ekiti State Governorship Election Petition Tribunal.

Issuing the warrant of arrest against Mr Aluko, Chief Magistrate Adegboye said since the court had the power to grant the order and it will serve the interest of justice, the State Commissioner of Police should arrest Aluko for the purpose of investigating and prosecuting him.