Arsenal, Southampton end it 0-0 in Tuesday match at Emirates 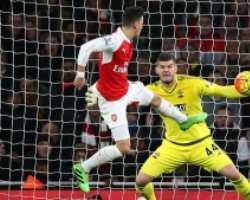 The Southampton goalkeeper made a string of fine saves to ensure Arsene Wenger’s side failed to score at home in the league for the fourth time this season and are now four games without a win in the top flight.

Mesut Ozil had three clear chances to break the deadlock in the first half as Arsenal struggled to break down a resolute Southampton defence.

Ozil was unable to find a way past Forster, though, and the England international was on hand again after the break to deny Olivier Giroud and Alexis Sanchez .

Southampton could have inflicted even more misery on the Gunners had Sadio Mane and Dusan Tadic done better with chances of their own.

A sublime piece of skill from Ozil in the 12th minute nearly lit the blue touch paper after a tight start, the German plucked a Sanchez pass out of the air only to see Forster save with his feet.

Southampton – who were without January signing Charlie Austin through injury – quickly registered their first chance less than a minute later, Mane unable to beat Petr Cech at his near post from Shane Long ‘s flick.

Ozil was presented with another opportunity midway through the half after Giroud had met a Hector Bellerin cross, the forward diverted the ball towards goal, but was again denied by Forster.

The visitors finished the half strongly and saw Mane, Tadic and Oriol Romeu all fail to test Cech from promising positions.

With half-time approaching, a mazy run from Joel Campbell almost lifted the frustration inside Emirates Stadium, but Ozil was again unable to turn the ball home.

Forster was again on hand three minutes after the break to keep the hosts at bay, comfortably pawing away a curling effort from Giroud.

Despite the growing anxiety coming from the home fans, Arsenal continued to create chances, but lacked quality in front of goal with Sanchez and Giroud wasteful.

Substitute Theo Walcott was next to have a sight of goal after 67 minutes. However, Forster made an impressive double save to deny the former Saints winger.

When Arsenal were finally able to get the ball past the 27-year-old keeper, James Ward-Prowse rescued Forster, the midfielder clearing off the line to deny Sanchez.

The hosts still needed to be alert at the back as the pace of Mane caused problems, but Southampton were equally as profligate in front of goal, Ronald Koeman’s side grateful to one final save from Forster to leave Arsenal with one point from the sides’ two league meetings this season.

Key Opta stats:
– Arsenal have failed to score in three consecutive Premier League games for the first time since February 2009 (four goalless games in that run).

– The Gunners’ last three top-flight games have produced a total of just one goal.

– Arsenal have now gone four Premier League games without enjoying a win for the first time since April 2014.

– Southampton have registered four consecutive clean sheets in the Premier League for the first time since November 2014.