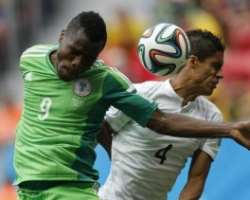 West Ham United have signed Nigeria’s Emmanuel Emenike on loan until the end of the season from Fenerbahce with an option to make the deal permanent, the Premier League club said on Sunday.

The 28-year-old striker, who has played 37 times for his country, has scored more than 80 goals at club level, including seven this season on loan at Al-Ain in the United Arab Emirates.

In 2013 he helped Nigeria win the Africa Cup of Nations, finishing as the tournament's top scorer with four goals, and he also played for the Super Eagles at the 2014 World Cup.

Emenike has crossed paths with West Ham manager Slaven Bilic over the years and said he was delighted to play for him.

“When he was at Lokomotiv Moscow, I was at Spartak Moscow, then he came to Besiktas and I was in Fenerbahce, so we’ve known each other for a long time. I’m happy to be here and happy to play for him,” he told the West Ham website (www.whufc.com).

In 2009, he joined Turkish second-tier club Karabukspor, where his 16 goals helped them win the title. He scored 14 times in the top flight before moving to Fenerbahce in May 2011.

Two months later he joined Spartak Moscow where he netted 24 goals in 51 games before returning to Fenerbahce in 2013, helping them win the league title and Super Cup in 2014.