A MEGA PARTY AND ITS MEGA WOES 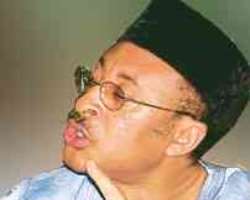 Prof. Pat Utomi
GBENGA ADENIJI writes on the troubled house of the mega party and its proponents' recent tirades which have further cast doubt on the ability of the opposition to speak with one voice

The issue of alliance among political parties is not a novel concept in Nigeria's political scene. In the Second Republic, parties like the Unity Party of Nigeria, Great Nigeria Peoples Party, Peoples Redemption Party and the Nigeria Peoples Party joined forces to tackle the then ruling National Party of Nigeria. But it was on record that the platform did not achieve much because of the leadership problem among the major political parties.

Also, in 1999, the All Peoples Party and the Alliance for Democracy jointly adopted Chief Olu Falae as their presidential candidate. And with the declaration of the Peoples Democratic Party's candidate, Chief Olusegun Obasanjo as winner by the Independent National Electoral Commission, the two parties parted ways.

The PDP has been in control of the country's affairs since the commencement of democracy in 1999. A situation which many opposition parties and stakeholders do not find amusing at all because of what they perceive as alleged orchestrated rigging by the party in connivance with the INEC.

It is a search for a lasting solution to this perceived political disequilibrium that prompted some notable politicians to rally themselves to form a mega party. Those who supported the idea included the former governor of old Kaduna State, Alhaji Balarabe Musa; former governor of Sokoto State, Alhaji Attahiru Bafarawa; former Vice-President Alhaji Atiku Abubakar, Falae among others .

But as the idea for an all-encompassing platform which would dislodge the PDP started gathering vigour, many political watchers at the sideline predicted its death on arrival. Their submission was hinged on the fact that personal ambition of members would eventually truncate the plan and that most of those who populated it were strange bed fellows.

Indeed, in less than two years after its conception, things have really not been at ease with the mega party conceived under the auspices of Mega Summit Movement led by Pa. Anthony Enahoro.

Last year, before the footing of the party was laid, the media director of MSM, Alhaji Hamisu San Turaki, yelled that fifth columnists had infiltrated its ranks. He said that President Umaru Yar'Adua's administration had employed some prominent leaders of opposition parties to destabilise the movement's plan to form a mega party.

The statement issued by Turaki read, ''Despite Atiku's open declaration for the mega party initiative and the active participation of his men in the national secretariat of the AC in the process, the South- West faction of the Action Congress financed by a former Lagos State governor has been lethargic to the ongoing popular process initiated by elder statesman, Anthony Enahoro, who had earlier rebuffed pressure from the former South-West governor to support Yar'Adua's government.''

Despite the grandstanding believed to have been put up by the masterminds of the party, many of them are believed to have seen the futility of trying to combat the PDP in the 2011 poll. Even the AC which is a very viable opposition in the country had since the birth of the mega party arrangement, dissociated itself from it.

The party which made its stand known through its National Publicity Secretary, Alhaji Lai Mohammed, stated that the plan to form a mega party to tackle the PDP was an unnecessary distraction, adding that no party mega or not, could conquer the ruling PDP if there was no genuine electoral system.

However, AC maintained that it would rather work with major stakeholders, including organised labour, students and other political parties, to push the momentum for the reform of the electoral system to ensure a level playing field for all.

''The issue of mega party formation is a ploy by the PDP-led Federal Government to destabilise the opposition, using fifth columnists in the parties. The plan is to push the opposition parties to waste their energy on a meaningless campaign while the PDP perfects its rigging for 2011. As the only party that has not succumbed to the destabilisation plot of the PDP, and the only one that represents a viable alternative to the rudderless, ideas-deficient PDP, our party cannot afford to waste its energy and scarce resources on frivolities such as mega party formation. Once the sanctity of election is enthroned, the PDP would stand no chance against even a mini party… ''

But neither the take of the political pundits nor that of the AC on the pact was strong enough to discourage its promoters from continuing with their permutations. Many are also aware that some individuals who subscribed to the arrangement before now, did so in order to fulfil their political ambition. And of course, it did not take long for their minds to be seen through when they could no longer linger as 2011 is fast approaching. A former presidential candidate of the All Nigeria Peoples Party who has denounced his membership of the party, Gen. Muhammadu Buhari (rtd) is now out of the mega party to float his own party-Congress for Progressive Change.

Atiku, who is also out of the AC has jettisoned the mega party idea, to return to the PDP which is his former party. From the look of things, there may be no more pretence that all is certainly not well with the coalition particularly as its proponents have decided to wash their smelly linen in public.

Hence, members of the PDP may be having a hearty laugh now as accusations and counter -accusations are now flying across the backyard of the troubled party.

Musa seemed to be the first to open what some have described as a can of worm by his recent accusation that all was well with the mega party until Atiku, Buhari, Tinubu and Bafarawa split it into two for selfish ambitions by instituting a division among the ranks of members.

He said that PDP was not performing in any sense and there was a need to replace it through a democratic process, adding that the only way to do that was for the opposition to come together and convince Nigerians that they could do more than the PDP.

'It started with the establishment of a political platform called Mega Summit Movement, after discussions with leading opposition groups in the country including civil society organisations, under the leadership of Pa. Anthony Enahoro. The movement started very well with the intention to bring about unity of forces so the PDP can be defeated in 2011.

'But within two months of the establishment of the movement, it split into two with Atiku, Buhari, Tinubu and Bafarawa, establishing a parallel movement, to divide our ranks. Later their splinter group was further divided into two again with Tinubu breaking away.

'The situation now is that the Mega Summit Movement has collapsed. The group comprising Tinubu, Atiku and the others has equally collapsed. 'Atiku has gone back to the PDP. Tinubu is not with them. Bafarawa is undecided. He may team up with Buhari or he may not,'' he said

Musa added that what was being considered was the formation of a credible democratic alliance by rallying behind the Labour Party for the 2011 presidential election.

In his reaction to the accusation, Atiku, in a statement issued from his media office in Abuja, picked holes in Musa's allegation, saying his account of the matter was inadequate.

''Alhaji Balarabe Musa gave an inadequate account of the matter possibly because he stopped being a member of the mega initiative immediately the group was expanded to include other politicians in the serious effort to form a viable and a truly political platform. The moment the group got bigger, he walked away.

It is on record that Alhaji Balarabe Musa stopped attending the meetings of the mega party initiative immediately its meetings were moved away from the house of Pa. Anthony Enahoro. It is also on record that he declined to join the mega party as a member on the ground that he was not willing to lose the identity of his political party, Peoples Redemption Party. He preferred to go into an alliance in spite of entreaties by many of the promoters of the mega party that the alliance had never worked in Nigeria,'' the statement read.

It further stated that Balarabe had the unenviable record of being the first major political actor to walk away from the mega party at a time when it had the most attractions for other parties and factions.

The chairman of Progressive Platform, a coalition of political analysts, Capt. Mobolaji Oyedeji, was of the opinion that the mega party was a non-flyer. He said that the fact that those who conceived it were already abandoning it pointed to the fact that there should be a realignment and coming together of political parties to stand up to the PDP in 2011.

On his own part, a Professor of Sociology at the University of Lagos, Lai Olurode, once said that except for few individuals in the party, he was not too optimistic with the resolve of those parading themselves as having the required ideals to create an alternative for the PDP in the coming general election.

With the clear signal of a divided house, it remains to be seen the next step the party intends to take as it considers the option of rallying the Labour Party in the next presidential election even as there emerges a new version under the name, Social Democratic Mega Party.