Time to tame greedy and reckless National Assembly – The Punch 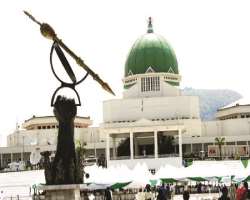 More than 16 years into the Fourth Republic, the overwhelming evidence suggests that our National Assembly, rather than facilitate, has become the major obstacle to the attainment of the full benefits of democracy for Nigeria's 170 million people. A former president, Olusegun Obasanjo, just reminded us of the legislators' subversion of popular aspirations and their habitual greed in the midst of mass poverty and joblessness. But unless Nigerians rouse themselves from lethargy, they will remain enslaved to a parasitic and insensitive cabal that has cornered a substantial portion of the national wealth.

The scale of financial impunity in the National Assembly is deeply worrying. Obasanjo, indeed, just re-echoed concerns raised these past 16 years by many stakeholders over the extremely large pay and perks appropriated by successive sessions of the National Assembly and their refusal to subject parliamentary financial transactions to public scrutiny. He made the point that at a time the economy was taking a bashing from falling oil prices and the government was hard put to fund its budget, lawmakers too ought to key into the 'need for sober reflection and sacrifice with innovation at the level of the executive and legislative arms…' We agree with the former president that 'it must not be seen that those who, as leaders, call for sacrifice from the citizenry are living in obscene opulence.'

That sadly is what obtains. But the National Assembly's responses are wearily familiar. Obasanjo's allegations are being batted away by some unashamed lawmakers. Bukola Saraki, the Senate President and Chairman of the National Assembly, bragged that the Eighth Senate was 'committed to good governance, transparency, accountability, due process and responsiveness to the economic reality of our nation.' Other less scrupulous lawmakers threw the allegations back at the former president. Allowing them to continue taking Nigerians for a ride may lead to extremely dangerous consequences. Muhammadu Sanusi II, the Emir of Kano, has just repeated the scary warning that Nigeria is sitting on an unemployment time bomb. Other awful social indices paint a picture of a very uncertain future for the country.

But impunity starts from a little misdemeanour left unpunished. Over the years, successive Legislative sessions escaped the wrath of the people for a string of ugly scandals that tainted the credibility of our parliament. Evidence abounds also of lawmakers' recklessness and insensitivity. Now, they are at it again. Placing their self-indulgence in lavish lifestyle above the public good, our lawmakers glossed over the dangers staring Nigeria in the face and awarded new luxury SUVs to themselves. The proposal of a N115 billion outlay in the 2016 budget, down from an average N150 billion in previous years for the parliament, has been subverted in advance by the decision of the two chambers to spend N4.7 billion on SUVs for lawmakers despite their car loans, pool buses and in defiance of public outcry. This is another outrageous example of brazen impunity in government.

Nigerians should resist the temptation to vilify the messenger, Obasanjo, who many rightly hold responsible for contributing to stifling the growth of democracy here, but, rather, attend seriously to the message. It will, therefore, be wrong to kick the issues Obasanjo raised into the long grass. By their greed, corruption, opaqueness, insensitivity and monumental incompetence, parliamentarians, since 1999, have stunted the entrenchment of democracy and atrophied development. As Obasanjo reasoned, our awful parliament has let Nigerians down in virtually all areas of representative democracy.

Yet, there are howls of anguish in the land. While about 70 per cent of Nigerians lived below the poverty threshold in 1999, some 69 per cent, according to the National Bureau of Statistics, lived on less than $1 per day and 60.9 per cent by 2014. For workers, the N18,000 minimum wage that some state governments find difficult to pay is a pie in the sky. But in real terms, a study, Groping in the Dark: Poverty the Nigerian Experience, found that the number of Nigerians living in poverty rose from 17 million in 1980 to 112 million in 2010. It is sickening to find that those who are supposed to be the representatives of the people live in obscene affluence in the midst of poverty and deprivation.

'Democratic transition,' according to American scholar, Amanda Taub, 'is not merely the absence of a dictator; rather, it is the absence of democratic rule.' Elsewhere, MPs are selfless in the course of their duties, in comparison to Nigerian legislators who approve obscene allowances to themselves. Two British MPs - Yvette Cooper and Liz Kendall - are a very good example. When the salaries of MPs were increased by just 10 per cent to £74,000 per annum in 2015 (other allowances were thereby reduced), they rejected the hike. A few other MPs decided that the increment would be given to charity.

But all persuasion for a change of heart has fallen on deaf ears here. Rather than improve, the quality of legislation and oversight functions, especially the ability to oversee public finances on behalf of the people that elected them, has been dwindling over the years. Nobody can trust this set of political buccaneers to come up with a change that is catalysed from within.

In the words of notable political scientists, Christian Welzel and Ronald Inglehart, in their article, 'The Role of Ordinary People in Democratisation,' published in the Journal of Democracy, 'Students of democracy increasingly emphasise the fact that democracy implies government by the people, not mere 'electoral democracy' in which elites have elections, but the citizens have little real influence on their actions.' True democracy implies that ordinary people become successfully empowered enough to put effective pressures on political office holders.

Nigerians have a duty to themselves and to generations yet unborn to put an end to the travesty currently playing out at the National Assembly in the name of lawmaking. To see effective change in the parliament, activists and civil society groups have a vital role to play, as is the case in other parts of the world. No benefits in politics come without a fight. Students and the organised labour groups should be in the vanguard of the struggle, but it should by no means be their battle alone. The apathy that has always manacled the common man to think that what happens at the National Assembly is not his concern has to be broken and shaken off. Only coordinated and sustained efforts from everybody will end the charade.

We need to start an impassioned debate on how to arrest the National Assembly's financial recklessness. Usually, in Nigeria, it is a few days of public protests and nothing more. But what is needed is persistence, as was witnessed in Hong Kong during the Umbrella Movement, where the people were in the street for 79 days at a stretch.

Besides, the time has come for the anti-corruption agencies to beam their searchlights on the parliament. All the money they collect, are they putting it to proper use? When a legislator collects constituency allowance, he is supposed to open offices in his constituency, hire aides and ensure that a medium of interaction is created between him and his constituents.

When this is not done, it is corruption, and both the Economic and Financial Crimes Commission and the Independent Corrupt Practices and Other Related Offences Commission should not allow such a law breaker to go scot-free. There is no doubt that our lawmakers have done immeasurable harm to their image and Nigeria's democratic credibility. It is time to stop them.