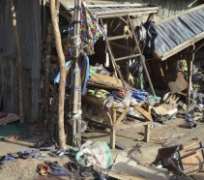 Boko Haram terrorists have taken their savagery to anew height with reports indicating that they  attacked Dalori village on the outskirts of Maiduguri, the Borno State capital, on Saturday leaving scores dead.

Multiple sources indicate that about 100 persons were killed by the insurgents in the remote Borno village.

Accounts say that the the terrorists, most of whom were dressed  in the uniform of the Nigerian Army, came in a Hilux vans and motorcyles and reportedly burnt several kids alive.

The terorists  were operated unhindered were said to have fired firebombs into houses in the town, which is about 5km from Maiduguri.

Reports indicate that several corpses till liter the town as at Sunday morning despite the fact that no fewer than 50 dead bodies have been deposited at the University of Maiduguri Teaching Hospital and the Specialist Hospital, Maiduguri.

Houses in the town were torched by the terrorists, who were said to have arrived in Army uniform on several motorbikes and trucks.

As at Sunday morning, charred remains of those burnt and shot to death still littered the town.

A resident of the community  who fled to Maiduguri, Yusuf Ibrahim, was quoted in reports as saying that the attack on the village started around 6:50pm and lasted for about an hour.According to Ibrahim,   livestock were not spared as the insurgents set them ablaze, and carted away foodstuff.

A rescue worker who participated in evacuating the victims told our correspondent that about 50 bodies were taken to the Borno State Specialist Hospital in Maiduguri, while 15 corpses were deposited at the University of Maiduguri Teaching Hospital.

It was gathered that among the dead were those who fled the town to Gamori, a neighbouring village, where three female suicide bombers also struck.

The spokesman of Operation Lafiya Dole, Colonel Mustapha Anka, confirmed the development, while saying that the details of the attack would only be released after the compilation of all reports emanating from the scene.