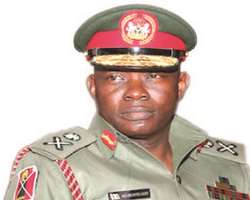 The Defence Headquarters (DHQ) on Saturday warned about the new antics by Boko Haram in its killing spree.

It said suicide bombers of the terror sect now dress like mad men with a view to deceiving the people.

It therefore warned the public to be on the lookout for such suicide bombers.

The acting Director Defence Information, Brigadier General Rabe Abubakar, in a statement, said: 'It has come to the notice of the Defence Headquarters that Boko Haram, in their desperation to cause colossal havoc, have now devised a new method where they dress like mad persons to gain unsuspecting access to public areas to detonate bombs.'

He said that the two male suicide bombers who carried out Friday's attack in Gombi, Adamawa State, dressed like mad men.

Five people lost their lives in the incident and several others were wounded.

Abubakar said it has become imperative for Nigerians to be wary of mad persons approaching markets, public places or crowded areas so as to nip this ugly trend in the bud.

He added: 'Nigerians are also enjoined to be security conscious at all times and should endeavour to report any suspicious person or object to security agencies for prompt action.'