By (SBCHROs), Southeast Based Coalition of Human Rights Organizations 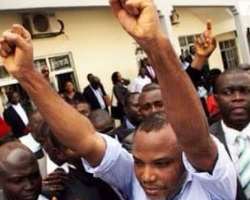 For the fact that Citizen Nnamdi Kanu has never killed anybody (use violence) or authorized anybody or group to kill (advocated for violence); for the fact that he was arrested and detained for 98 days without trial contrary to Sections 35 (4) (a) (right to personal liberty), 33 (right to life), 34 (right to dignity of human person), 36 (right to fair hearing) and 41 (right freedom of movement) of the 1999 Constitution and Articles V,VI,VII and XII of the African Charter on Human & Peoples Rights (ratified and domesticated by Nigeria in 1983); for the fact that the Nigerian authorities led by President Muhammadu Buhari have flouted with impunity and reckless abandon several court decisions bordering on protection and enforcement of these constitutional rights of the detained Prisoner-of-Conscience; for the fact that Citizen Nnamdi Kanu’s arrest and detention was politically motivated and ill-conceived; for the fact that he was arrested and detained and is being persecuted for his non violent political and social thoughts; and for the fact that the mind of the trial Judge; Hon Justice John Tsoho was possibly abused, biased and corrupted presidentially, leading to the Judge convicting Citizen Nnamdi Kanu before trial (his choice of words); upon which Citizen Kanu was denied his long awaited and deserved bail; Citizen Nnamdi Kanu eminently deserves the local and international status of a prisoner-of-conscience.

For the purpose of refreshing the minds of all and sundry particularly the Nigerian democratic forces, Prisoner of Conscience (POC) is a term coined by Peter Benenson; founder of Amnesty International, UK in a 28 May 1961 article (“the Forgotten Prisoners") published in the London Observer Newspaper. The term refers to anyone imprisoned because of their race, sexual orientation, religion, or political views; expressed or conducted non-violently or in peaceful manners. It also refers to those who have been imprisoned and/or persecuted for non-violent expression of their conscientiously held beliefs. Amnesty International, UK regards prisoners of conscience as political and activist prisoners (non white collar or street criminal suspects) or jailed international or national citizens who have been jailed or imprisoned by repressive and suppressive political authorities because of their political, religious or other conscientiously-held beliefs, ethnic origin, sex, color, language, national or social origin, economic status, birth, sexual orientation or other status, provided that they are non violent and peaceful and have never sanctioned the opposite.

The Myanmar’s leading pro democracy activist and Nobel Laureate, Ms Daw Aung San Suu Kyi is one of the world’s recognized prisoners-of-conscience and was an Amnesty International’s prisoner of conscience (POC) from 1989-1995; 2000 to 2002; and 2003 to 2010. Though she is banned by her country’s repressive military rulers from standing for Myanmar’s presidency since 1988 when her National League for Democracy (NLD) was heading for a landslide victory before the country’s military junta struck and annulled same; but her campaigns for restoration of democracy, civil liberties and rule of law in Myanmar recently paid off leading to full return of democracy and inauguration of its first post military’s democratically elected parliament this 1 st February 2016 . Though banned from holding presidency seat for now; but Ms Suu Kyi; 70, is expected to be President of her country by proxy with her NLD having won 80% of the parliamentary seats.

Further condemned in strongest term is possiblevoice of Jacob and hand of Esau in the disagreement that erupted in the legal defense team of Citizen Nnamdi Kanu to the extent that it also contributed in part to denial of bail of the detained prisoner-of-conscience by Hon Justice Tsoho; occasioned by poor bail application and watery argument by one of the defense counsel. The recent open-letter to the EU Parliament written from prison by the detained Prisoner-of-Conscience; in which he disclosed how he was tortured and maltreated by DSS while in its captivity clearly contradicted the recent account of one of his defense counsel, who said Citizen Kanu was never tortured or maltreated by DSS and that he was even cracking jokes with his captors. Comparing the former with the latter, it is mostly safe to suspect another voice of Jacob and hand of Esau. Though Citizen Nnamdi Kanu’s bail bid was lost, but the most striking part of the last court proceedings was judicial resolution of the authenticity of Citizen Kanu’s defense legal team in his physical presence and under his written authorization. In all these, the Federal Government’s age-long divide-and-rule tactics may most likely be at work.

We are also saddened and shocked by Hon Justice John Tsoho’s reported resort to use of convictable and uncouth choice of words; upon which he based his bail refusal ruling. In over seven reports of journalists particularly judicial reporters perused in the course of our fact finding on the proceedings under reference, the same convictable and uncouth choice of words was reported to be used by the trial Judge. Hon Justice John Tsoho was specifically reported by several media sources as having said the following judgmental words “(Nnamdi) Kanu is a threat to national security, and as a result will not be granted bail”. He reportedly held further that “if released, Kanu may commit the same offence again, and that “there is a probability that he may jump bail because he possesses dual citizenship”. The judge conclusively ruled that Kanu be remanded in prison custody, and ordered an accelerated hearing of the case.

If it is true that the trial judge used such biased and judgmental words on post arraignment bail application ruling; then the Judge has already convicted and found Citizen Nnamdi guilty before trial. It is also against the CJN’s recent assurances given to Intersociety that Kanu’s case will be resolved justly and judiciously. This explains why we held that the mind of the Judge was presidentially abused, biased and corrupted. The Judge was also caught up by the presidentially bullets of hearsay and concocted facts; to the effect that Citizen Nnamdi Kanu sneaked into or entered his mother country improperly.

Our questions are: when has it become an international or national crime for a citizen to bear dual citizenship? If Hon Justice John Tsoho can be so afraid and possibly stampeded presidentially not to grant bail to a political and activist prisoner or detainee bearing mere dual citizenship; is he not aware of the revolution going on in the global judicial systems of States to the extent that many have adopted universal jurisdictions and armed with international arrest and detention warrant licenses? As recently as few years, domestic courts in Belgium, South Africa and Senegal have assumed regional and international jurisdictions and issued and executed international arrest warrants against national, regional and international citizens or nationals accused of crimes against humanity in their respective countries. Today, former Chadian military dictator and butcher; Hissene Habre is in detention in Senegal standing trial for mass murder he committed while in power in the 80s. Is the like of Hon Justice Tsoho not leading Nigerian judiciary or its segment back to the cave?

In all, we urge the new defense legal team of Citizen Nnamdi Kanu not to waste further time in appealing against the referenced judicial bail refusal decision of Hon Justice John Tsoho of the Abuja Federal High Court Three.

Signed:
For: Southeast Based Coalition of Human Rights Organizations (SBCHROs)