'We were not sacked by Supreme Court' – Oduah, Ubah, others insist 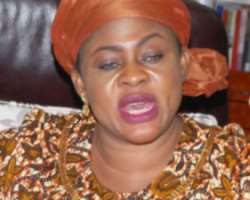 Senator Stella Oduah on Friday in Abuja, described as “a misinterpretation”, media reports which quoted a Supreme Court judgment to have sacked her and other federal lawmakers from Anambra.

Reports in the media said that the apex court had ordered the replacement of Oduah and other federal lawmakers from the state saying that their nomination to contest in the 2015 election was wrong.

In a statement issued by Cynthia Ferdinand, Press Secretary to the Senator, Oduah said that the report in the media was misleading as the apex court did not order the withdrawal of her certificate of return.

She said that the judgement of the Supreme Court said that it was only the National Executive Council of a political party that had the legal right to sponsor candidates in an election.

Oduah, therefore, stressed that she and all the other lawmakers from Anambra state have not been sacked by the Supreme Court contrary to media reports.

â€Ž“It is pertinent to note that this is a mere misinterpretation of the Supreme Court rulings andâ€Ž should be disregarded in all entiretyâ€Ž.

“The Supreme Court did not order the withdrawal of the Certificates of Return issued by the Commission.

“It did not hold that the faction of the PDP had the right to sponsor candidates for the Peoples Democratic Party (PDP).

“It did not equally authorise the Commission to substitute our clients with the individuals whose names were on the list improperly allowed by the Commission,

“Series of judgment of the Supreme Court of Nigeria states that it is only the National Executive of the party that has the vires to sponsor candidates,' she said.

Meanwhile, the solicitors to the nine lawmakers allegedly sacked, have written to the Independent National Electoral Commission (INEC) not to also fall into the folly of misunderstanding the judgment.

The letter signed by the lawmakers urged the commission not to allow itself to be misled by its legal department just as it was initially misled to accepting the list presented by the state chapter of the party.

The lawmakers stressed that separate rulings of the Supreme Court including that of Jan. 29, upheld that only the list submitted by the National Executive Committee was valid.

“This correspondence is aimed at setting the record straight so that your good self will not again be misled by your legal department into unjustifiably occasioning an unnecessary confusion in the process.

The letter also drew the attention of INEC to pages 4647 and 48 of the judgment of the Supreme Court to further butress the point that the couurt did not sack their clients.

The solicitors stated further that the apex court did not authorise the Commission to substitute the lawmakers' names with the individuals whose names were on the list improperly allowed by the Commission.