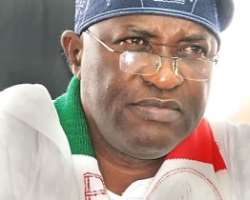 The Peoples Democratic Party leadership tussle took a turn to the worse on Thursday, as three chieftains now lay claim to the Office of National Chairman.

Ahmed Gulak, erstwhile Presidential Adviser on Political Matters to former President Goodluck Jonathan, had on Wednesday stormed the party's national secretariat in Abuja to assume position as the national chairman.

In his address of take over to newsmen, Gulak had claimed that a court judgment delivered by Justice Hussein Buba on December 15, 2015 asking the Acting National Chairman, Uche Secondus, to vacate his office within 14 days, equally pronounced himself (Gulak) as the new chairman of the party.

In a swift reaction, the PDP Governors' Forum in their emergency meeting on Wednesday night in Abuja condemned the invasion of the party's national secretariat by Gulak.

The governors, delivering a communique, frowned at Gulak's action, declaring that a National Executive Committee  would soon be convened to elect a substantive chairman from the North-East to replace the erswhile National Chairman, Ahmed Mu'azu, who resigned last May.

In another development, Ondo State Governor and Chairman of the PDP Governors' Forum, Dr Olusegun Mimiko said the governors have directed the National Secretary, Prof. Wale Oladipo, to assume the office of Acting National Chairman.

“In recognizance of the judgment the court gave, we call on the National Secretary to take over the leadership of the party immediately and that is in line with the provisions of the PDP constitution,” Mimiko told newsmen.

Excerpts from the communique read in part:
” At the 2016 first meeting of the Peoples Democratic Party Governors' Forum held today, Wednesday, January 27, 2016 at the secretariat in Maitama, Abuja, we resolved and hereby issue a communiqué as follows;

“The invasion of the party headquarters today (Wednesday) by Ahmed Ali Gulak, who reportedly assumed the Chairmanship of the Peoples Democratic Party (PDP) is regrettable and condemnable,” it said.

The National Working Committee (NWC) swiftly dismissed the forum’s pronouncement asking Oladipo to assume the position of the party’s chairman insisting that Secondus remained in his post, pending the outcome of the meeting of the statutory organs of the party fixed for next week.

A statement released to newsmen and signed by the PDP National Legal Adviser, Victor Kwon, entitled, 'No change in PDP leadership,' disclosed that “there has not been any change whatsoever in the leadership composition of the party at the national level.”

The statement further reads, “the statutory organs of the party, the NWC, National Caucus, BoT and NEC will be meeting next week to deliberate on some developments including the replacement, from the North-East of Alhaji Adamu Mua'zu, who resigned as the National Chairman of the party.

“The replacement will be in strict adherence to the provisions of the constitution of our great party as specified in section 47(6). Until then, the status quo remains, which means the Deputy National Chairman, Prince Uche Secondus, remains as the Acting National Chairman.”

Kwon said: “Furthermore, it must be reiterated that all relevant stakeholders of our party, including the PDP Governor's Forum, National Caucus and the Board of Trustees (BoT) as well as our leadership structures at all levels are united behind the current National Working Committee in the efforts to rebuild, reposition and strengthen our party for the challenges ahead.

“The leadership of our party has resolved to remain focused and not be distracted by the unpatriotic actions of the former Political Adviser to the former President because we are privy to his agenda of being an agent of destabilisation in the party.”