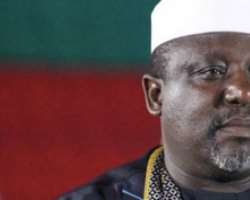 IMO State Governor, Rochas Okorocha, yesterday disclosed that the state is insolvent, as its monthly wage bill has outstripped its monthly statutory allo¬cation from the Federal Government.

The governor said monthly servicing of the bailout fund has further compounded the situation.

This was just as he reiterated that there was no go¬ing back on the state government's decision to con¬cession the management of parastatals.

Okorocha, who revealed this when he spoke to newsmen at the Government House in Owerri said the monthly wage of the state had always been high¬er than what the state receives from federal alloca¬tions and internally generated revenue.

'We cannot continue to patch a cracked wall as if all is well, we need to break it down in order to rebuild it, and the current wage bill of the state is be¬yond our capacity. Imo State now receives the least allocation among the South-East states because of the monthly repayment of the bailout fund which the state took from the Federal Government, a situation which has further compounded the financial situa¬tion of the state.'

The governor insisted that in spite of the financial dilemma of the state, no worker is being owed any salary. – The Sun.