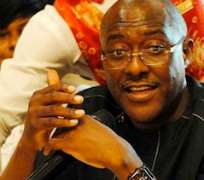 Metuh, was arrested by four operatives of the anti-graft agency from his Abuja home on January 5.

Metuh and his firm, Destra Investment Limited, were charged before the Abuja Division of the Federal High Court over alleged N400 million fraud.

The charge marked FHC/ABJ/CR/05/2016, was signed by the Assistant Director, Legal & Prosecution Department of the EFCC, Mr. Sylvanus Tahir. – Vanguard.