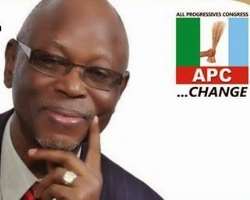 The National Chairman of the All Progressives Congress (APC), Chief John Odigie-Oyegun on Tuesday called on the Minister of Niger Delta Affairs, Pastor Usani Uguru to give priority to the completion of the East-West Road project in the Niger Delta region.

Odigie-Oyegun made the call when he received in audience the minister on a courtesy visit to the party's National Secretariat in Abuja.

He said: "You have one of the most challenging and strategic assignment as Minister of Niger Delta Affairs. The Niger Delta is an area that had been steeped in unrest. You must ensure that the unrest does not arise again.

"You have the East-West Road which is a major challenge. It will be a significant achievement for this administration if the project is completed. The project will go a long way in assuring the region that this government is working in their interest"

The contract for the construction of the East-West Road was first awarded in 2006. The road was initially divided into four sections, but late 2014, a fifth section was added to it, covering Oron to Calabar in Cross River State.

Meanwhile, Odigie-Oyegun disclosed that the APC was planning a three-day policy dialogue tentatively scheduled for March 2016 which will bring together party leaders, government and relevant stakeholders to exchange ideas and profer solutions to guide the country out of the challenges facing the country, particular the economy.

Responding, the Minister of Niger Delta Affairs, Pastor Usani Uguru said the ministry under his watch was poised to contribute to the achievement of the party's Change Agenda for the country and also bringing sustainable development to the Niger Delta area.

The minister promised to give priority to the completion of the East-West road.