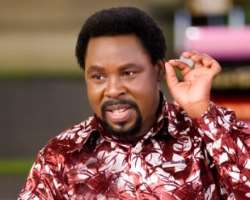 The Lagos State Government has directed the Synagogue Church of All Nations to stop the construction of buildings in Agodo, in the Egbe-Idimu Local Council Development Area after some residents alleged that part of the facility was blocking the main canal in the community.

The office of Drainage Services, Ministry of Environment, which served the notice on SCOAN, also instructed that the alternative drainage channel being done by the church be stopped.

In the letter, dated January 20, 2016, a copy of which was obtained by our correspondent, the office equally accused the church of causing environmental nuisance and vowed to prosecute the owner or occupiers of the facility if 'the said nuisance is not abated within 24 hours'.

PUNCH Metro had reported on Monday, January 18, 2016, that about 12 streets in the community were affected by flood during the rainy season because water could not flow from gutters on their streets into the main canal, which they alleged that SCOAN was building on.

However, a spokesperson for the church had told our correspondent that plans had been concluded to assist the community in constructing a drainage channel to solve the problem of flood, which had displaced many landlords.

But the Lagos State Government last Wednesday served a stop-work order on the church just as residents urged the government and the church to sort out the issue and salvage the community from the flood, adding that rainy season was fast approaching.

The letter, which was signed by one Onabegun on behalf of the Commissioner for the Environment, read in part, 'Inspection carried out under the Environmental Sanitation Law, 2003, on tenement situated at the end of Ajisegiri Street, Agodo Egbe, within Lagos State, revealed that you have failed to keep your tenement and its surroundings free from filth, rubbish, refuse or waste of all description; you built along the drainage alignment and setback and illegally blocked the canal right of way.'

Our correspondent, who visited the community on Friday, observed that the church had started constructing a drainage channel to link gutters on Ajisegiri, Abati and Ogbewi streets.

A landlord, Sanjo Adeboye, said the church would have completed the project before The PUNCH's publication on January 18, but for residents, who allegedly failed to properly clear the grasses on the path of the drainage channel.

'The community delayed the drainage work because they did not clear the path thoroughly. The church requested them to get people who will work on it and be paid. For four weeks, there was no response. The church later decided to hire some labourers to work on it. That was what delayed the work till Monday when the publication came out. There is no main canal in this area; what we have is discharge into the natural creek from Egbe-under-bridge.'

The President, Abanise Waterside Youth Association, Daniel Ogechukwuka, said, 'After the publication, engineers from the church came to our community and requested us to give them a quotation for the drainage project. We gave them one but they advised us to give them another one. They said they wanted to do a drainage channel that would last for a very long time. We are trying to get a solid quotation. Our plea to the church is to let the drainage channel be there before the end of this month. So that there will no longer be flood in our area when it rains.'

The Chairman, Abati Street, Balogun Jonathan, also urged for timely completion of the drainage channel, adding that some state government officials had visited the community, but could not solve the problem.

He said, 'There has been flood in this community for a very long time. Part of my house had been affected before. I don't know what caused the flood, but people were saying it was caused by Synagogue. One day, some officials of the church came and took us round the whole area. Everybody saw that it was not blocked. In respect of that, they advised us to stop dumping refuse and it was stopped. We started holding meetings and requested assistance from the church on the construction of a drainage system and they have started the project. I will be very happy if it can be completed on time.'

Mrs. Ada Nkwo of Ajisegiri Street, who was always forced to vacate her home during the rainy season, urged the church to do a good work on the drainage channel to bring a lasting solution to the flood.

'If it is beyond the church, let the government come in and do it once and for all. The suffering caused by the flood every year must stop,' she added.

An official of SCOAN, who did not want his name in print, confirmed that the notice was served on the church. He, however, said, it only affected the ongoing drainage channel.

He said, 'The church received a letter from the state government, but it is only the drainage channel work it instructed us to stop and we have complied. Residents that urged us to complete the work did not know we have been served that notice.'

The Lagos State Commissioner for Information and Strategy, Steve Ayorinde, promised to contact the Ministry of Environment and get back to our correspondent with comments. He had, however, yet to do so as of press time. Punch