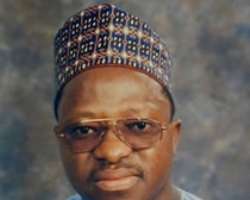 About nine years after preferring the charges of alleged diversion of the Plateau State's N1.126bn ecological funds against a former governor of the state, Joshua Dariye, the Economic and Financial Crimes Commission (EFCC) finally opened its case before a Federal Capital Territory High Court in Gudu, Abuja, on Monday.

The trial began with a Supreme Court's judgment delivered on February 27, 2015, laying to rest an interlocutory application filed by Dariye and which had stalled the trial since it was filed in 2007.

The apex court after dismissing Dariye's appeal in the judgment ordered Dariye, who was the Plateau State governor between May 29, 1999 and May 18, 2004, to submit himself for trial.

Dariye, who is currently a senator representing Plateau Central, dressed in a brown kaftan, and looked unruffled as the first prosecution witness testified in court on Monday.

The prosecution called its first witness, Musa Sunday, who narrated to the court, presided over by Justice Adebukola Banjoko, how Dariye allegedly diverted the state's N1.126bn ecological funds.

Sunday, a detective with the EFCC, said he was involved in the investigation into how Dariye allegedly diverted Plateau State's funds while serving as governor.

The witness said investigation by the EFCC operatives revealed that the former governor had, in 2001, applied for the ecological funds in the name of his state but collected the money in person and lodged it with the Abuja branch of the All States Trust Bank Plc (now defunct).

The witness added that the bank manager, allegedly acting on Dariye's instructions paid N100m in the name of 'PDP South-West.' The money he said was later traced to a company - Marine Float Nigeria Limited - allegedly owned by former Vice President, Atiku Abubakar.

Sunday, who was led in evidence by the prosecuting counsel, Mr. Rotimi Jacobs (SAN), said efforts to ensure that the firm refunded the money failed.

He said Dariye instructed the payment of N178.8m to an unregistered company - Ebenezer Retnan Venture Limited, which was later discovered to belong to the former governor.

He said investigation also revealed that Dariye ordered the payment of N80m from the ecological funds to the Permanent Secretary in the Ecological Fund Office, Kingsley Nkumeh.

The witness said although the EFCC later recovered the N80m from Nkumeh, he fled the country on learning that he was to be prosecuted.

He said Nkumeh had yet to return to the country.
Sunday added that Dariye paid N250m to a firm - Pinnacle Communications - owned by a contractor to the Plateau State Government.

He told the court that the decision to investigate Dariye was informed by a request by the London Metropolitan Police for Nigeria's assistance in investigating some parties and companies linked with the former governor.

The witness said, 'We invited Pinnacle Communications and the representative of the company actually confirmed collecting the N250m, but told us he is a contractor of the Plateau State Government.

'The N80m paid to Union Homes turned out to have been paid to a Permanent Secretary, Ecological Funds Office, Kingsley Nkumeh.

'When interviewed, he said that was his share for facilitating the payment of the ecological funds to the state. The said amount was recovered by the EFCC from the Permanent Secretary of Ecological Funds Office.

'Charges were later prepared for him to be charged to court in Lagos. He was granted an administrative bail; he resigned and left the country. Our investigation at Union Homes revealed that the cheque was cleared into an account owned by the Permanent Secretary, Nkumeh.

'The bank gave us the mandate card of the Permanent Secretary, into whose account the N80m was paid. The N176.8m was traced to Ebenezer Retnan Venture's account domiciled at All States Trust Bank. From investigation at the Corporate Affairs Commission, we found it was not registered. There was no record of the company's existence.

'The N100m paid to the PDP South-West was traced to Marine Float Limited. The mandate we received from the bank showed that Marine Float is owned by a former Vice President of Nigeria, Alhaji Atiku Abubakar. Efforts at recovering this money have been going on. We did not succeed in recovering it.'

The court proceedings were interrupted by an outage.

Sunday, also in the course of his testimony, narrated how the bank, All States Trust Bank Plc (now defunct), aided the former governor to lodge the cheque into his (Dariye's) account instead of the state government's accounts.

'When we recovered those documents and cheques from CBN, we traced it to where it came from. Investigation led us to the Ecological Funds Unit, under the Presidency. At the Ecological Funds Unit, we interviewed one Mr. Adewusi, who told us that there was a time the Plateau State Government applied for ecological funds for ecological problem in the state, and approval was given for N1.126bn.

'And that before the cheque was prepared, a payment voucher covering the said amount, which had other documents attached to it, were prepared and audited, at the end of which payment was made.

'When the cheque was ready for collection, the defendant and his orderly, one Inspector Victor, went to the Ecological Funds Office and, upon instruction by the defendant, the aide signed for the cheque and the defendant took the cheque to All States Trust Bank, Abuja.

'Instead of the money to be paid into any of the Plateau State Government's accounts, the bank used its own bank accounts to clear the cheque and disbursed to individuals and companies as instructed by the defendant.

'Copies of his instructions, both type written and handwritten were made available to us during investigation.'

Sunday is expected to resume his testimony today (Tuesday) by 10am.

The EFCC, in 2007, preferred money laundering and charges bordering on the diversion of the ecological funds against Dariye. Punch