Politics: The Hundreds of 'Fulani' Militant-Terrorist Herdsmen Are BACK! 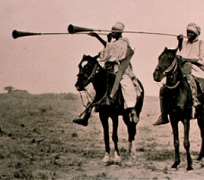 We were here before. From 2012 we read heart-wrenching breaking stories of some so-called militant Fulani herdsmen who drove convoys in the wee pre-dawn hours and killed everybody in sight and burned down villages.

We wrote and wrote and besieged our Military apparatus to unveil who these so-called 'Fulani militants' devastating the Middle belt in particular, were. [See: The 100 Military Uniform Clad ‘Fulani Herdsmen’ Assassin Convoy , by ENDS, April, 8 2014] There was no response. Finally after we had cried to the high heavens, sometime in 2014, the security apparatus caught-up with some of them. It was revealed: they were Boko Haram. [See: Fulani herdsmen confess to membership of Boko Haram , by Vanguard, April 23, 2014]

And now they are BACK! All of a sudden just as the Nigerian military declared the technical defeat of Boko Haram and the group's inability to conduct large-scale insurgent strikes on Nigerian territory; the hundreds of armed, incendiary-loving 'Fulani' herdsmen are back in full force.

The recent attack by this alleged unique group saw them in a pre-dawn raid, attack and burndown 6 villages in northern Adamawa on the border of Sambisa forest, killing everything in sight. Read familiar? Reports allege that they then retreated into Sambisa forest. Also read familiar?

Sadly, and of a most distressing note, the locals once again like was the hallmark of the Jonathan years, revealed that they had forewarned Nigeria's security services of the impending terror attack. It did not help. The community elders and other eyewitnesses even said they were Boko Haram. [Channels TV contains that story: Suspected Terrorists Attack Six Villages In Adamawa ]