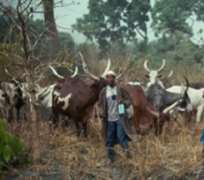 A group of Fulani militants numbering in hundreds overran the villages of Koh, Ndikajam, Tabongo and Jat of Girei Local government Area of Adamawa state.

The attacks were reported to have killed over 30 people killed including a Divisional Police Officer(DPO) incharge of Vunokilang Police Station in Girei Local Government Area Adamawa state who were alleged brutally killed in an early morning attack by suspected Fulani Militants.

Confirming the killings, spokesman of the State Police Command, DSP Othman Abubakar said the DPO and his team were attacked while on official duty in the affected villages where he was killed by suspected Fulani herdsmen.

Abubakar added that report at his disposal indicated that the attackers looted, maimained the food stuff and livestocks of the villagers before setting the villages blazed

The DPO, late CSP Okozie Okereofor, who was just two months old in the command was said to be ambushed when he was leading his men to the disputed area and he eventually lost his life in a shot out with the attackers.

The corpse of the slain Police Officer and remaining civilians are currently deposited at the morgue of the Federal Medical Centre, Yola.

The source said, prior the attack, there has been a lingering crisis between some Fulani Herdsmen and farmers in the areas which he believed must have influence the attack.

He said there has been a lingering threats on the communities razed down by Herdsmen who were alleged wrote letters to these communities that they were going to lunch an attack on them.

However the elders of the areas have said to had reported the matter to the security agencies in the state about two weeks ago so that something be done to avert the attack.

One of the Elders of the affected areas , PP Elisha, said if the security agencies had acted swiftly as earlier alerted by the elders that there may be an attack, they could have stop the attacked.

However, he said they thank God that the military have sent their men to chase out the Herdsmen's machineries adding that several people have been killed while five villages were burnt down by the Herdsmen.

Elisha who visited some injured victims of the attack who were immediately evacuated to Specialist Hospital and Federal Medical Centre in Yola, by relatives lamented that presently there are serious pandemonium in the affected areas adding that many people in the affected areas including areas that were not attacked have flee their homes for fear of future attacks.

However an eyewitness had earlier told our correspondent that it was Boko Haram insurgents that attacked the five villages at 7:30 am of Sunday (today) morning due to the nature of the attack which he alleged similar to Boko Haram mode of operations or attacks.

The eyewitness claimed that many people were killed and injured in the attack, however he could not give the exert figure of casualty.

He said soldiers sent on immediate spot assessment were wounded and chased backward by the attackers.

The eyewitness also alleged that the attackers have kidnapped the DPO of Vinikilang adding that a Hilux van full with cattles and food items belonging to the attackers was captured by the natives of the area.

"l narrowly escape from the hands of the attackers" he said.

When asked whether the attackers were herdsmen or Boko Haram, he said "we have been living together with these Fulanies, and we know them but the people that attacked us were strangers, I believed that the Fulanies in our area drafted some strangers which we believe are members of Boko Haram because we have been having unresolved problems with them which had led to the death of some people in the past "he said .

The Acting Brigade commander of the 23 Amoured Brigade in Yola, Col ABA Popoola confirmed the attack that resulted to the killing of several people and razing down of five villages.

He said everything was under control as he said he has deployed his men to areas to cordon the area.

Popoola said the fight was between the herdsmen and farmers in the affected areas but did not revealed whether some of his men were wounded.

Checks revealed that the attackers have been repelled by the military and most of them have escaped into near by bush some kilometers to Sambisa forest.