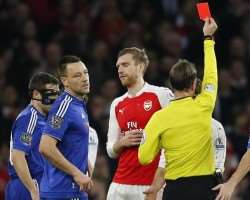 ARSENAL IMPLODE UNDER PRESSURE
Heading into this game all the pressure was on Arsenal as they had slipped to third in the Premier League table over the weekend. They crumbled as Chelsea won 1-0 thanks to a moment of madness from Per Mertesacker .

For the second time this season against Chelsea a red card in the first half caused Arsene Wenger 's side to self-implode and even before they went down to 10-men in the 17th minute they were second best. Whether it was nerves or just coming up against a side who has had their number so many times in previous meetings, Arsenal lacked urgency and were punished for slack defending and a failure to deal with the threat of Diego Costa . Wenger will be disappointed that his side missed the chance to go back to the top of the Premier League and once again shot themselves in the foot against their London rivals. The Gunners have now failed to beat Chelsea since 2011 and haven't scored in their last six games against the west London side, and you wonder whether they have a mental block when facing them. Mertesacker and Laurent Koscielny looked nervous early on and the former couldn't handle Costa's pace in-behind and was caught out as he tried to play offside, then blocked off Costa and received a straight-red as the last man.

This defeat doesn't mean Arsenal's title hopes are over. Far from it. And if their best chances had fallen to anybody other than Mathieu Flamini on Sunday then they could have nicked a point as they impressed in the second half with 10-men. However, it does throw up even more questions about their mental fragility when they reach landmark moments such as this. The Gunners squandered a great chance to send out a message that they are ready to win the Premier League.

RED-HOT COSTA A CONSTANT PAIN
Costa is a pest. He is a menace and a nuisance but when he is focused and channels his immense amounts of aggression in a positive way, you get a performance like Sunday's. The Spanish international, 27, bullied Mertesacker and Koscielny and was always playing on the last shoulder. That caught out Mertesacker as he got the wrong side and when Willian 's inch-perfect pass found Costa in the clear, even though he made a meal out of Mertesacker stepping across him it was clearly a penalty which Mark Clattenburg did well to take his time on before brandishing the red card.

If reducing Arsenal to 10-men — for the second time this season, as I'm sure Arsenal fans won't need to be reminded about his antics involving Gabriel and Koscielny back in September during Chelsea's 2-0 win — wasn't enough, Costa then delivered the game-winning moment just five minutes later. A delicious cross from Branislav Ivanovic found Costa in the six-yard box and his instinctive one-touch finish marked his sixth goal in his last six games. He's flourishing under Guus Hiddink and his aggression, for now, seems to be controlled. His return to form could be the biggest indicator yet that Chelsea have, finally, turned things around and on the back of his goals could storm on and secure a top 10 finish. He remains a polarizing figure but is back doing the business.

BLUES REWARDED FOR BRAVERY
Before kick off the camera panned in on Cesc Fabregas (who was fabulous throughout) and Oscar having one final word. Hand movements and serious expressions on their face looked to have already unveiled Chelsea's plan to undo Arsenal. The duo were gesticulating in circular motions and looked to be saying “get in-behind” and that is exactly what the Blues did time and time again. Oscar and Costa forced Koscielny into an error early on which led to the former having a shot tipped wide of the near post by Petr Cech , and their high-pressing in certain areas denied the Gunners from dictating the tempo early on.

After they scored the goal and had a man advantage then it was easy enough for Chelsea to hold on despite a few hairy moments with Thibaut Courtois , uncharacteristically, struggling to gather high balls into the box. This victory now means Hiddink has won three and drawn four of his seven games in charge in all competitions. Chelsea haven't lost since Jose Mourinho was fired eight games ago and they are now six games unbeaten at the Emirates Stadium and nine games overall against the Gunners. The Blues were brave early on and were rewarded for taking this game by the scruff of the neck. Now, let's see if a victory away at a title contender can give them the confidence to kick on and well and truly push themselves away from the relegation zone and into the relative, albeit unwanted, safety of midtable. Also, Chelsea is 14 points off the top four. Just saying