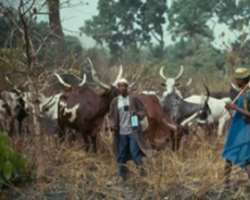 The Divisional Police Officer of Vunokilang Police Station in the Girei Local Government Area of Adamawa State, Okozie Okereofor, and 60 villagers were killed on Sunday when gunmen, suspected to be Fulani herdsmen, invaded four communities in the local government area.

Among those which unconfirmed report alleged were killed in the attacks, which were carried out at about 5.30am on Sunday, were some policemen attached to Okereofor, a Chief Superintendent of Police.

Also, two riot policemen, who were on their way to quell the violence in Gerei, were killed in Mimbia, a border village between Plateau and Kaduna states when their patrol vehicle came under attack from rampaging Fulani herdsmen.

The corpses of the slain DPO and other policemen were said to have been deposited at the morgue of the Federal Medical Centre, Yola, the Adamawa State capital.

It was gathered that more than 200 gunmen invaded Demsare, Wunamokoh, Dikajam and Taboungo and some parts of Fawore, where scores of the residents were gunned down.

The Police Public Relations Officer, Adamawa Police Command, Othman Abubakar, who confirmed the killings, said the DPO and his team were attacked while on an official duty in the affected towns.

Abubakar, a Deputy Superintendent of Police, added that the attackers looted, seized foodstuff and the livestock of the villagers before setting the villages ablaze.

The PPRO stated, 'The suspected Fulani herdsmen raided four villages in Girei Local Government Area on Sunday morning around 5.30am, killing scores including the DPO.'

The acting Brigade Commander of the 23 Armoured Brigade, Yola, Col. A. B. Poopola, said the situation had been brought under control while soldiers were helping the police to maintain law and order.

A community leader, Mr. P. P. Elisha, said the DPO's team came under the attack of the invaders when it was heading for the crisis areas to restore order.

Elisha alleged that recently, most of the Fulani herdsmen and their families, who resided in the four towns, relocated to Yola, adding that he reported the ''strange'' movements to the police and the district head of Girei on Saturday night.

The Media Officer of the Special Task Force in Plateau State, known as Operation Safe Haven, Capt. Ikedichi Iweha, told our correspondent that two riot policemen were killed in the attack on the Kaduna community.

He said some gunmen opened fire on the patrol vehicle, killing the policemen in the process, adding that the STF ensured that there was no spillover into Plateau State.

Iweha stated, 'The incident happened in Mimbia, which is a border village between Plateau and Kaduna states. When we heard the information, we responded immediately by ensuring that there was no spillover into Plateau. Troops from the 4 Demonstration Battalion in Kaduna also responded.

'The two policemen have been identified and taken to Kaduna by the troops.'

The Executive Director of Stefanos Foundation, Mr. Mark Lipdo, quoting some survivors of the Adamawa attacks, claimed that many of the inhabitants of the troubled communities had deserted their villages while the armed herdsmen were reported to have occupied the communities.

'Survivors said they burnt down houses in Ko, Gereng and Ndikajam and were shooting sporadically. It is still difficult to establish the casualties as people are currently running to safe places.' Punch